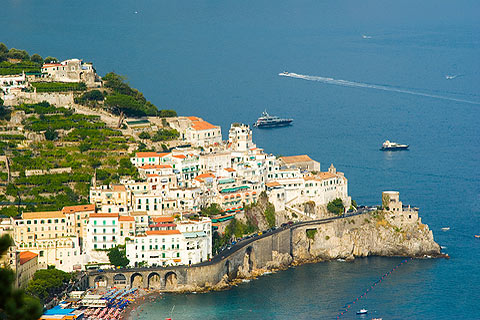 The coastal village of Atrani is squeezed between the sea and high cliffs, at the entrance of Dragon Valley on the Amalfi coast. Close to Amalfi itself - so close it is almost a part of that town - it has been classified as one of the 'most beautiful villages in Italy'.

With its medieval centre, its landscape and its beach Atrani offers many attractions to tourists. Although Atrani is a small village there are lots of places to visit, in part because at the time of the Republic in Italy it was the favourite residence of the most noble families of Amalfi. See also history of Atrani.

As with most villages along the Amalfi coast it is the setting and the charm of the village itself that is the main attraction, with its steep streets, narrow alleys and pretty houses. Atrani also has a beach in the centre of the village which is unusual on this coast, but be sure to also see some of the principal historic monuments while you are here! 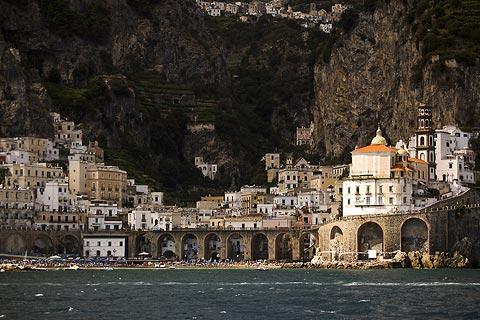 Note: Atrani is very close to Amalfi, which is on every visitor's 'must visit' list, so Atrani tends to get rather overlooked. As a result it is usually much quieter here and easier to enjoy the atmosphere than in busy Amalfi. The facilities here such as restaurants and bars are much more limited here than in Amalfi.

The main 'downside' in Atrani is the road that follows the Amalfi Coast and squeezes its way between the village and the sea, and rather reduces the charm of the seafront in the village.

The most important monument in Atrani is the Church of San Salvatore de Birecto, where the coronation of the highest government officials once took place. Remodelled in the neoclassical style, the church is actually very ancient. Founded in 940, it contains a marble pluteus from the 11th century showing reliefs in a Byzantine style and some figures in the Lombard style. The bronze door of the church was made in Constantinople in 1087 by the nobleman Pantaleone Viaretta. 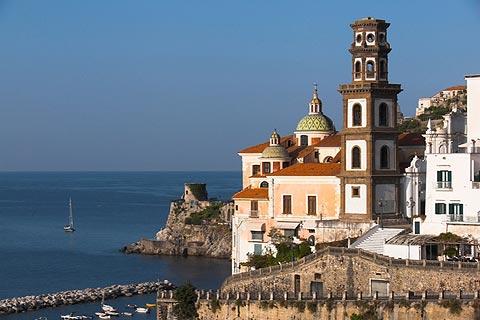 On the slopes of the mountain behind Atrani is the Collegiate Church of Santa Maria Maddalena, built in the 13th century as a thanksgiving to Our Lady by the inhabitants after their deliverance from the Saracen pirates. The church consists of a single rectangular room covered by a barrel vault, lit by two windows from the Baroque period. In the sacristy of the church there is a cinerary urn of white marble.

Visit this church even if none of the above interests you because it has lovely views along the coast! Next to the church is the so-called Masaniello Cave, beneath which is the house of Tommaso Aniello (aka Masaniello, 1620-1647), a famous Neapolitan who led the insurrection against the Spanish in 1647. 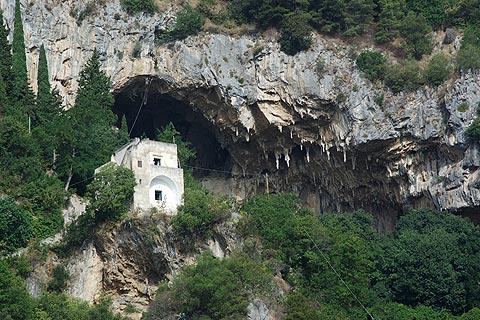 Just above the old road linking Atrani and Amalfi is the so-called Cave of the Saints, probably part of the ancient Benedictine monastery of Saints Quirico and Juliet, founded in 986.

The cave is shaped like an irregular quadrilateral, with walls decorated in the 12th century with Byzantine-style frescoes that depict the four evangelists. Saint George stands on a green background, with an arm raised to hold a lance.

In front of the Church of Carmine you can see the remains of the wall which, in medieval times, surrounded the village, while on the inside there is the ancient northern gate of Atrani. The Church of Santa Maria del Bando, built in the 12th century, is situated on a rocky hill under the “Torre dello Ziro”, which overlooks both Atrani and Amalfi. It is also called the Torre del Bando ("Tower of the announcement"), because it was from here that sentences and bans were read to the people during the Republican period.

The old traditions of Atrani are also preserved in the local cuisine, which reflects the Neapolitan traditions of fish, seafood and traditional recipes. Among the types of fish, note especially the so-called “blue fish”. Other notable local products include the cheeses from the hills such as mozzarella and provole and fresh tomatoes "a piennolo," that is grouped in clusters, which are kept until winter. We also suggest you taste the local pasta such as the "scialatelli" and “laganelle”.

Atrani also have delicious desserts such as "o 'bocconotto" with cream and cherries and “o pasticciotto”, which is more abundant, and the “cassata” or the “sfusato of Amalfi”, which is undoubtedly the finest in the Mediterranean. Among the liquor made from ancient peasant recipes the “limoncello” is most famous, but try also the nocino (or nocillo).

This section of the Amalfi coast is less visited than the region to the west with Positano, Amalfi (the principal resort on this section of coast) and Ravello but if you continue a little further east you can explore the fishing village at Cetara and the small towns of Minori and Maiori. Each has its own charm and Maiori has a beach.

Atrani is in the Campania region of south-west Italy, and part of the very popular Amalfi coast. It is a short distance east of the villages of Ravello and Amalfi and about 25 kilometres east of the resort at Sorrento.

Map of Atrani and places to visit

Places to visit near Atrani 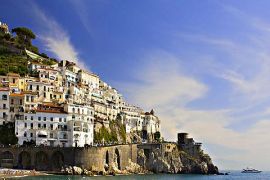 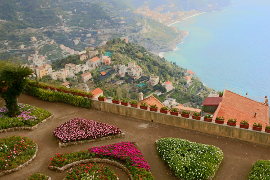 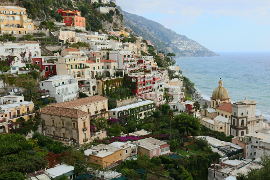 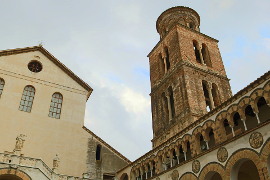 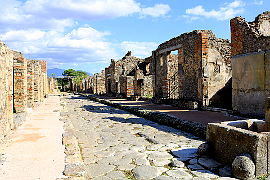