The town of Carini is in north-east Sicily and located on a hill about 170 meters above sea level, within the chain of the Mounts Ericini and just a few kilometers from Palermo, with a territory that extends to the sea.

Although the main highlight for visitors are the beaches and the castle, there are several other places of interest to discover in and around Carini so allow time for a visit when you are staying on the coast nearby. Carini is also visited for its shopping and has several large shopping centres and malls.

Your visit can begin from Carini castle, built by the Bonello family in 1094. Excavations here confirm that the oldest parts of the castle date back to Norman times (the Norman origin of the castle is also confirmed by Al Idrisi, who spoke of "a fortress of new construction" in the 11th century). However the current castle dates from the 16th century.

The earlier castle certainly had a less imposing structure, and was described as having "a few and vaulted rooms" (called 'dammusi', houses excavated in the rock).

The ground floor of Carini castle is the Food Hall, later transformed into a library, where there are two stone arches dating from the 15th century, supported by a solid pillar. 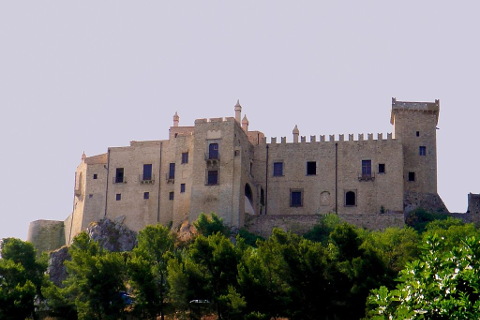 On the upper floor in the Festival Hall, also 15th century, there is a coffered wood ceiling, embellished with decorations typical of the Catalan-Gothic style. From here you can access the massive square tower, crowned by a double lancet window.

In the eastern section there is a chapel frescoed around the end of the 17th century and a marble statue depicting the "Madonna di Trapani", attributed to G. Mancino, a 16th century sculptor.

Inside the chapel is a wooden tabernacle of the 17th century with Corinthian columns. Outside the chapel, a small door leads to to the ramparts, where you can see the ruins of a perimeter wall.

A large courtyard opens on to a view of the inner façade, renovated in the Renaissance style, in which the portals are based. The portals are surmounted by the coats of arms of the La Grua Family, depicting a crane surrounded by quatrefoils ('luck symbols'). Upstairs there are two rampant lions symbolizing the arms of the Lanza.

The works of artistic and historical interest in and near Carini are significant and numerous.

The Mother Church was built in the late 15th century and completed in the late 18th century. It has a loggia on the side, a façade with flat pilasters and two lateral towers. Radically altered in the 18th century, it has a porch on the right side and tiled panels depicting the Crucifixion, the Assumption, Saint Rosalia and Saint Vito (1715).

Inside is a valuable painting of the 'Adoration of the Magi' by the Tuscan artist Alessandro Allori (1535-1607) and, in the chapel, a precious 17th century wooden crucifix with a silver crown, placed on an altar flanked by huge stucco statues by Procopio Serpotta (1679-1756).

The Oratory of Saint Sacramento was built next to the Mother Church in the mid-16th century, and has an 18th century interior completely covered with stucco, by Vincenzo Messina and representing Faith, Charity, Fortitude and Penance, Hope, Justice and Divine Grace, and also smaller figures, resting on brackets below the windows, depicting scenes connected with the mystery of the Eucharist. 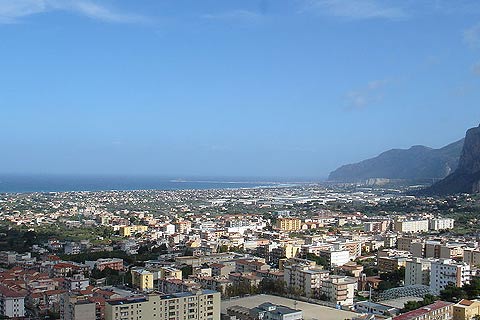 The collection is further enriched by the decorative motifs (in the style of Procopio Serpotta) of cherubs, garlands of flowers and fruit, coats of arms and grotesques. On the roof is a fresco depicting the "Triumph of the Faith".

The Church of St. Mary of the Angels, located behind the Mother Church,  has a single nave with side chapels in carved wood paneling. To admire in the church is a wooden crucifix by Fra’ Benedetto Valenza (18th century), who also worked on the decoration of the Rococo chapel.

Eating out in Carini

The local Carini restaurants have menus offering meat and fish, good traditional Sicilian cuisine. At lunchtime you might try the "maglie siciliane" with garlic, olive oil, red pepper and a sprinkling of ricotta, while those who enjoy fried foods will enjoy the "rice croquettes."

As a second course we recommend the grilled swordfish or the classic Sicilian sausage, with a side-dish of local cheeses (such as the cheese with pepper). For dessert we suggest the "cannoli" of Sicily, the Sicilian "cassata", “mustaccioli”, pistachio nougat, biscuits with sesame, Buccellato and the "nucatoli". Finally, for those who love pizza, we highly recommend the "sfincione" of Palermo.

Places to visit near Carini

The Catacombs of Villagrazia are nearby and worth visiting, while for sea lovers there are the beaches of Carini - although these can be very busy and the coast here is rather overdeveloped. Personally we would probably head for one of the beaches near Terrasini, a short distance west of Carini.

Nearby Palermo is a fascinating city and a highlight to a trip to Sicily.

Map of Carini and places to visit

Places to visit near Carini 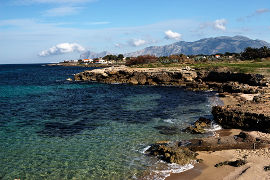 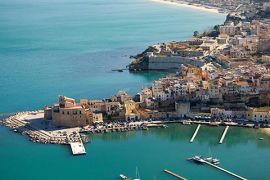 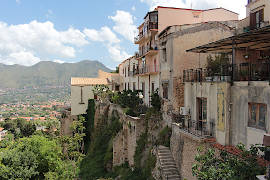 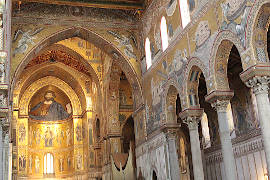 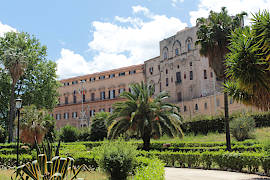