Portofino is a very lovely village and harbour on the coast near Rapallo and to the north-west of the Cinque Terre coastal region of picturesque villages. The town is set in an attractive natural inlet and surrounded by steep valley sides covered with olive trees.

The village is not easy to reach by car: the road to Portofino is slow, and parking tricky and expensive. We were told that parking, even when you are able to find it, costs around 6 euros per hour.

If you are arriving in Portofino by car be sure to park in the car park on the edge of the town - driving in the narrow streets around the harbour is both impractical and stressful and in any case you won't find a parking space!

The best way to reach the town is by taxi-boat from one of the other harbour towns just along the coast at Rapallo or Santa Margherita Ligure. Parking is easier in these resorts than in Portofino, the boat trip is not too expensive, and you get lovely views along the way.

The village itself is a traditional Italian fishing village, centred around its harbour and the streets behind, where you will find a great deal of buildings of character, many painted in the colours popular in the Liguria region, and numerous picturesque views across the yacht-filled harbour. 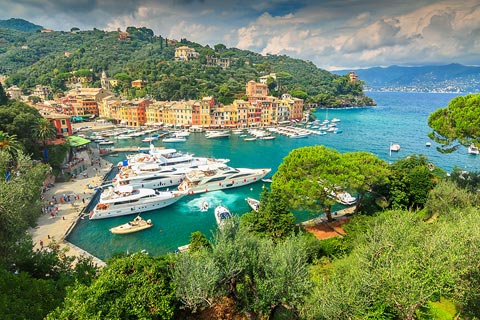 Broadly speaking, in Portofino there is a traditional harbour area with small boats and lovely pastel coloured houses; a designated area for larger luxury yachts to moor next to the small harbour; and a main street called Via Roma that goes up the hill from behind the harbour that interconnects with various small alleyways. So the village is small and easy to explore.

Although there are few historic monuments in the village you can see the 12th century Church of Saint Martin in the center of Portofino as well as an Oratory on Via Roma and the Church of San Georgio (12th century although rebuilt after World War 2).

Italy This Way comment: don't be deterred from visiting Portofino by stories of expensive restaurants and hotels, tourist crowds and difficult parking. The village is one of the most lovely we have seen anywhere and well worth the effort!

Of course, being very scenic has a downside. Portofino has attracted the great and the good - and above all the wealthy - since the middle of the 20th century. It is sophisticated and elegant, busy and expensive, and a part of every 'guided tour' that passes along the coast of north-west Italy. 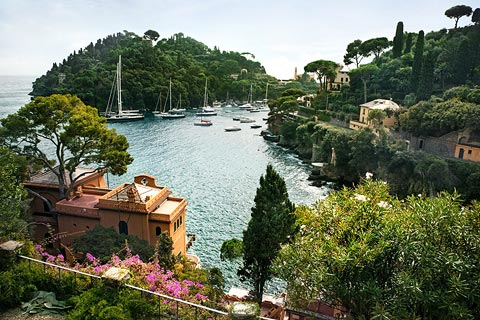 If I had to make a criticism it would be that the large yachts in the harbour seem excessively oversized compared to the village itself, but don't worry they also add to the glamour and there are plenty of places where they are out of sight!

Behind the harbour posh shops and upmarket restaurants battle for your attention, but if you have limited funds be cautious about casually sitting down on the terrace of a restaurant for a couple of glasses of wine without checking the price first. Some of the restaurants are less expensive than others but none are very cheap.

Many of the best known Italian brands such as Armani and Gucci have established boutiques here - start your shopping on Via Roma behind the harbour.

While in the harbour area, on the hill behind the yachts you can visit the Outdoor Centre of Sculptures, a lovely hillside garden with sculptures by several renowned artists. 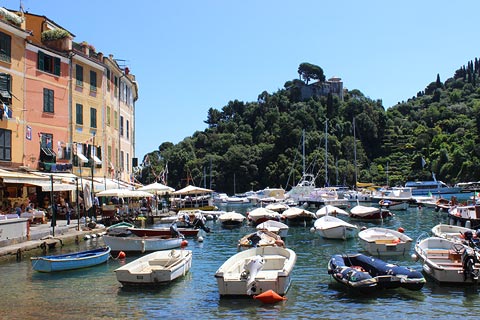 After enjoying your explorations of Portofino harbour climb up the hill for a look at the Church of Saint George and the 16th century Castle Brown, and yet more splendid views from both the terrace in front of the church and from the castle gardens.

This is where you will find the most photographed viewpoints in Portofino, although most views are concealed by trees unless you pay to access the castle.

A castle has stood here since Roman times, with building materials from the earliest fort now incorporated in the current castle. The castle we see today has its origins in the early 15th century, when it played in important role in defending Genoa territories from attack by Venice. The original castle was very basic and substantially expanded in the early 16th century: it is little changed since 1557.

In more recent centuries the castle and town changed hands several times, including a period under the French when Portofino was renamed as Port Napoleon, a period under the English after Napoleon was defeated by Nelson, and ownership by Sardinia. Most of the current decoration dates from the 19th century and renovations by the English Consul in Genoa who bought the castle when the Sardinians found it too expensive to maintain and of limited strategic value.

Although renovated in the 19th century, high quality and older materials were used and the interior of the castle appears much older than it really is. You can also see a large number of artworks in the castle.

An entrance charge is payable for the castle (5 euros) and although the castle itself is of limited interest the views from the terraced gardens are exceptional.

The path continues onwards to a lighthouse at the end of the headland.

If you follow the path towards Paraggi out from the other side of Portofino you get different views, and you also pass a small, stony beach which is free to use. There are two small sandy beaches a little further along this stretch of coast.

One local landmark close to here is the Abbey of Saint Fruttuoso, on the coast south of Portofino and best known for the large statue of Christ underwater just off the coast, placed to protect sailors from harm. San Fruttuoso can not be accessed by road so prepare yourself for an invigorating walk along the cliffs from Camogli or Portofino (or a scenic boat trip from Camogli if you prefer)! 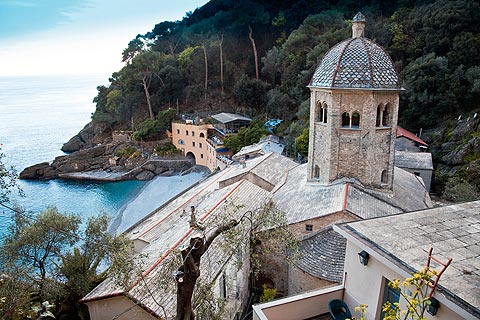 Another abbey, this time to the north of Portofino and in a picturesque location on the coast, is the Abbazio di San Girolama which has wonderful formal gardens, a crypt and saracen tower and 16th century cloisters among its highlights. See www.cervara.it/en/ for visitor information.

Visitors to Portofino will also enjoy exploring nearby Camogli and the villages and coast around Cinque Terre.

Map of Portofino and places to visit

Places to visit near Portofino 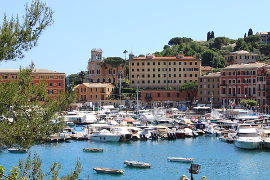 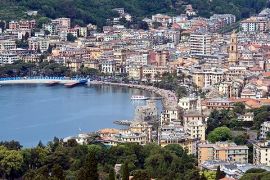 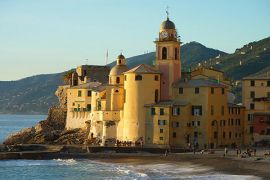 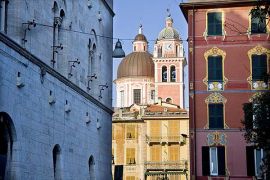 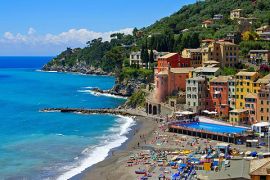 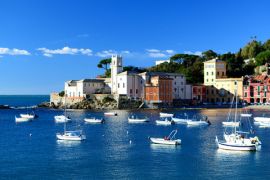