The Villa Romana del Casale is on the south-west edge of Piazza Armerina, a town in the centre of Sicily, and is the main attraction in the town.

Italy This Way comment: we have never seen ancient mosaics like those at Villa Romana del Casale, which are very extensive and also impressive works of art, and make all other floor mosaics seem very unambitious: a must-see detour when you explore Sicily and nothing like the small areas of ancient patterned floor you will have seen elsewhere!

A visit to Villa Romana del Casala is more interesting if you have some knowledge of the building first. The villa was built in the first decades of the 4th century on the site of a more modest house that had been built 50 years earlier. It is thought, although it is not certain, that the villa belonged to a Governor. 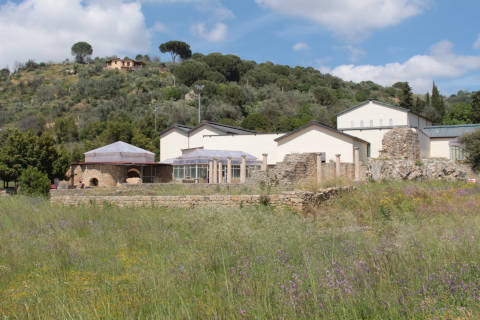 In the 5th century and 6th century it was necessary to fortify the villa, so it was surrounded by fortified walls and openings were closed. This could not prevent the decline of the villa over the following centuries: at first the rooms were adapted to different uses and then later the structure was transformed with the construction of new buildings and a new settlement here.

This settlement was destroyed in 1160 by King Willam I and a new town was established a few kilometres away, where we now find Piazza Armerina. Some re-settlement took place here in the 15th century, with the name Casale - this is were the current name of the villa comes from.

Broadly speaking, the villa has a large open entrance, followed by a courtyard surrounded by columns, with the sauna area and private quarters to the left of the courtyard, the private quarters with the most important mosaics at the far end, and an oval room called a peristyle to the right, with smaller rooms around most of these principal areas.The visit follows this route in a clockwise direction.

These mosaics are unique both in the sheer quantity and size of the mosaics and in the scenes they represent - instead of (or rather, as well as) the repetitive patterns you might expect from Roman mosaics you are greeted with elaborate scenes of activity, drawn from both real life (such as everyday life and hunting trips) and from stories in mythology. 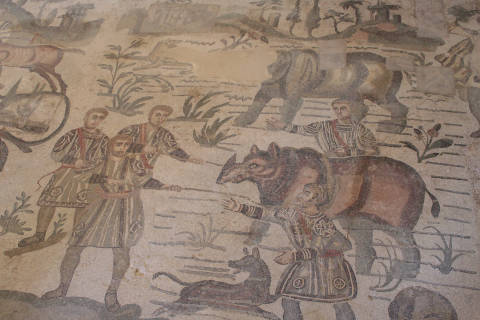 The images in the mosaics often refer to the purpose of the room they are in, so for example in one room there are mosaics of 29 fruit baskets, that show this was a dining room, but there are also many images whose purpose is less clear for example those of Hercules.

In total there are approximately 50 rooms and sections to the villa, so a great deal to see!The villa was built in four sections:

Section 1: in the first section there are the baths, supplied with water by two aqueducts. At this level there is also a massage room and gym.

Section 2: in the second section is the main entrance, with three arches and a large open-air courtyard surrounded by columns of Ionic style. The mosaics here are quite simple in design.

Section 3: in the third section there is the peristyle, a rectangular courtyard surrounded by columns in the Corinthian style, with a central fountain. To the left of the peristyle there is a group of small rooms, including the room of the so-called "Little Hunt", that of the fishermen and that of the dancers.

To the right there is a group of three rooms, one of which, known throughout the world, is the room of the "girls in bikinis". Along the eastern side of the peristyle is the corridor of the "Great Hunt". The entire corridor, 90 metres long and several metres wide, has a floor made of many images representing numerous activities involved with hunting large animals alive, probably to be used in circuses in Rome, and is very remarkable indeed.

Section 4: Finally, in the fourth section at Villa Romana del Casale are the "Triclinium”, or the private rooms of the family, and the Basilica.

Visitor information: there is a large car park at Villa Romana del Casale, as well as an area with several small cafes and lots of tourist shops. The route you follow during your visit gets quite busy, so you might prefer to arrive quite early to avoid the crowds. 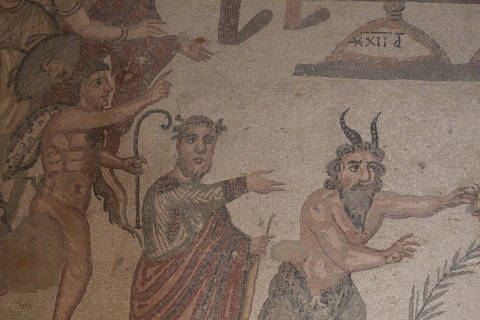 Although it is Villa Romana del Casale that attracts visitors to the town, Piazza Armerina also has an interesting town centre with several historic buildings so we recommend you also allow yourselves a couple of hours to explore.

If you enjoy visiting historic sites, the temples at Agrigento are on the coast south of here and also very interesting.

Map of Villa Romana del Casale and places to visit 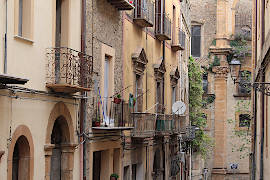 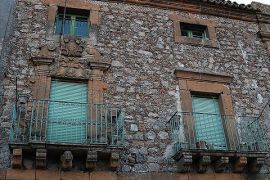 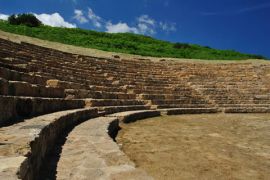 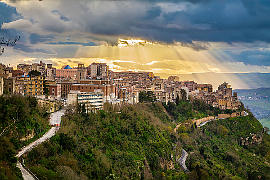 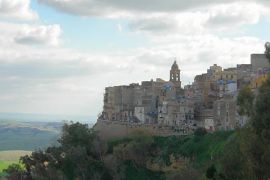 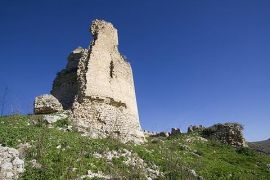 Italy This Way comment: we have never seen ancient mosaics like those at Villa Romana del Casale, which are very extensive and also impressive works of art, and make all other floor mosaics seem very unambitious: a must-see detour when you explore Sicily and nothing like the small areas of ancient patterned floor you will have seen elsewhere!