The city of Verona, in north-east Italy east of Lake Garda, is perhaps best known as the setting for Romeo and Juliet. The town contains a very impressive number of historical monuments spanning the era from Ancient Rome and medieval times to the renaissance, despite extensive damage to the roman monuments caused by a large earthquake in 1117.

As a consequence the center of the historical town is now preserved as a UNESCO world heritage site. The town is also sophisticated and the people elegant as they shop in exclusive boutiques - just how you imagine a wealthy Italian town to be.

Here we only mention the most imposing and famous monuments in the city. As you explore Verona you will discover many other places of interest, particularly palazzos and small churches, as well as museums, parks and gardens. 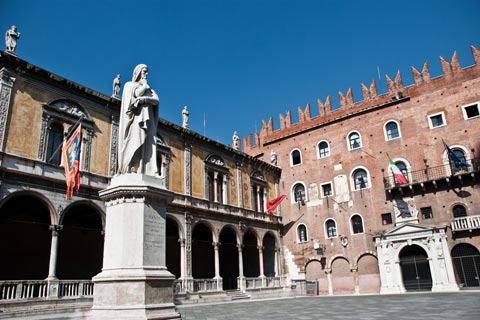 Be sure to allow plenty of time to explore the town - and to relax and absorb the atmosphere and enjoy at least an ice cream or two in one of the main squares. Most visits will start with the most famous relic of antiquity in Verona, the Roman amphitheatre in Piazza Bra.

The arena itself, although now incomplete with only a part of the original 1st century outer walls remaining (much of the original structure was used in subsequent building projects in Verona), is still one of the most imposing to be found and one of the largest in Italy.

The amphitheatre originally held 25 000 spectators who came from all over the region to watch the gladiators combats and the circle of 'inner walls' is still an impressive sight. The amphitheatre is also a popular venue for summer operas. 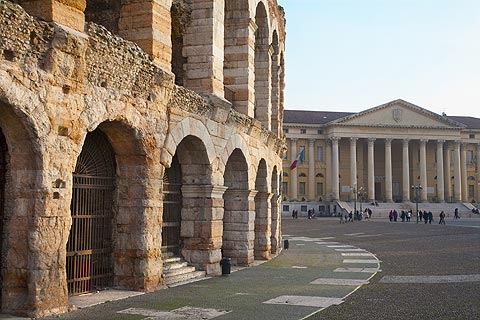 The Piazza Bra itself has several notable buildings as well as the arena itself, including the imposing classical style Town Hall, built in the 19th century and called the Palazzo Barbieri, the 17th century Palazzo Gran Guardia, and the 16th century Palazzo Guastaverza. The center of the square contains pleasant gardens.

From here you can follow the busy shopping street of Via Mazzini to reach the Piazza delle Erbe, the bustling center of Verona for tourists and again with several impressive monuments - indeed it brings to mind the great historical squares of Rome.

Via Mazzini itself is excellent for shopping if you have some money burning a hole in your pocket, or for gazing in shop windows for the rest of us...

Allow plenty of time to visit the Piazza del Erbe, there is a popular market here and many interesting sights. Get your bearings at the 14th century fountain with the madonna.

On one side of the square is the Lamberti Tower, a tall redbrick belltower / clocktower (square at its base and octagonal for the highest part) that is a landmark for Verona, the tallest tower in the city, and dates from the 12th - 15th centuries. Even better you can climb to the top of the tower for great views across the square.

Another tower on the same square, the Gardello Tower, has its origins in the 14th century. 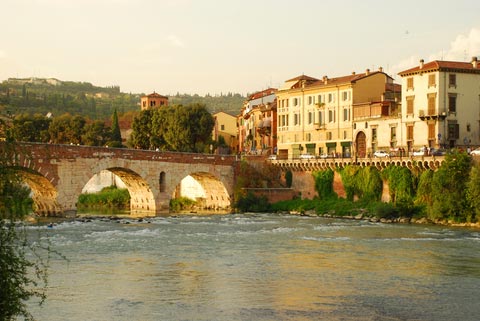 Several of the other buildings on the square have equally historic origins, although significant modifications were made in the 19th century. For example, the 14th century Chamber of Commerce building was modified in the 19th century. note in particular the decorative facade of the 17th century Palazzo Mafei with the statues along its roofline balcony.

Another important square in the heart of Verona is the Piazza dei Signori, which feautures yet more impressive renaissance period palaces around its edges. There is a statue of Dante at one end of the square, in front of a very lovely renaissance building with porticos at ground level, called the Loggia del Consiglio.

There is an imposing gateway near here on the Corso Porta Borsari, an impressive entrance to the town constructed by the Romans 2000 years ago. Elsewhere in Verona you can also see substantial parts of the medieval defensive walls and their entrance gates, and the Arco dei Gavi (built in Roman times, demolished under Napoleon then rebuilt in the 1930's).

Another Roman monument in Verona is the Roman theatre, on the river banks, and also next to the Verona Museum of Archaeology. The museum contains an interesting range of artefacts particularly sculptures, that have been found in the vicinity.

Also on the river is a very ancient bridge, dating from Roman times - although the bridge has been rebuilt on several ocasions, most notably in the 20th century after severe damage during World War 2.

More recent, the castle in Verona dates from the 14th century and now holds an interesting Art Museum. The bridge next to the castle also provides a good view across the city.

Most visitors of course also visit the 13th century family home of the Capuleti family - the Casa di Giulietta - because the balcony of the house is said to be the inspiration for the famous 'Juliet' balcony from Romeo and Juliet. Or rather inspired by...because the balcony was added to the house in the 1930's! It is exceptionaly popular with tourists anyway... 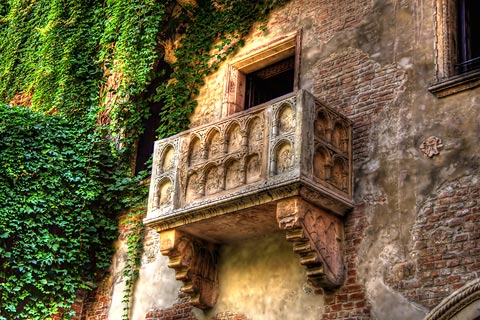 On another house just a short stroll from here you can also see the 'Romeo' balcony.

Churches and religious monuments in Verona

Of course no visit to an Italian town would be complete without exploring the churches, and there are several of interest in Verona. Principal among them - although not the largest - is Verona cathedral.

Because it was built over the course of several centuries it includes both romanesque and gothic styles, and inside there are some interesting medieval frescoes. The entrance facaden in particular the griffins and carvings around the door, is the main highlight.

Particularly interesting is the Basilica of Saint Zeno, a very unusual example of romanesque architecture dating from the 12th century, with a slender tower, an associated red brick tower, a typical roman style facade and a cloisters. Inside the basilica, the use of alternating rows of pink and white stone creates a light interior, and there are many frescoes and other decorative highlights

The basilica is a ten minute stroll outside the heart of Verona but architectural enthusiasts will most certainly want to visit. 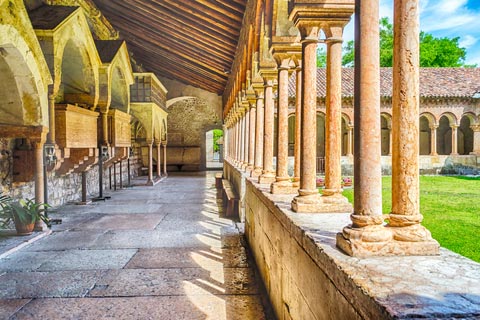 The largest church in Verona is the Church of Sant'Anastasia, built in redbrick during the 13th - 15th centuries and also containing notable artworks. Take a look at the adjacent Chapel of Saint Giorgetta.

Be sure to also see the Church of Saint Mary, in particular for the imposing monument in front of the church.

Another interesting church is the Church of San Giorgio in Braida, also on the river banks and featuring a dome and facade added during the cousrse of the 16th - 17th centuries.

Map of Verona and places to visit

Places to visit near Verona 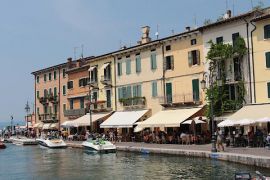 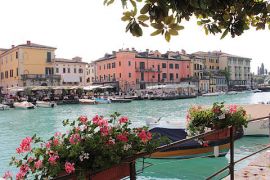 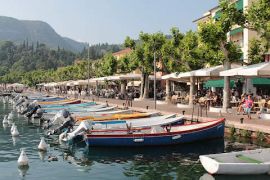 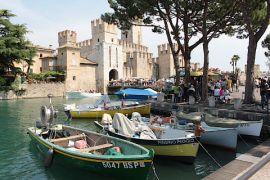 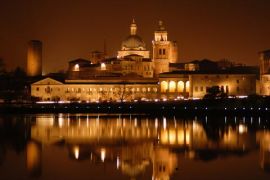 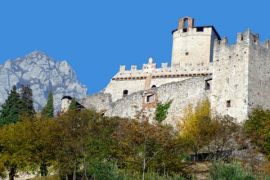