Triora is a picturesque village in a lovely setting of wooded valleys well into the Ligurian hills of north-west Italy. Triora is officially classified among the most beautiful villages in Italy.

Triora is well known in Italy because in the 16th century it was the place where trials and executions of witches took place - still 'commemorated' in the town museum!

The attractions of Triora

The centuries-old village of Triora is at the foot of the Trono Mountain, overlooking the Argentina valley, where it preserves almost intact its medieval appearance. In the heart of the village you will enjoy exploring the ancient alleys, arched passages and steep pathways of what is claimed to be one of the oldest villages in Liguria. 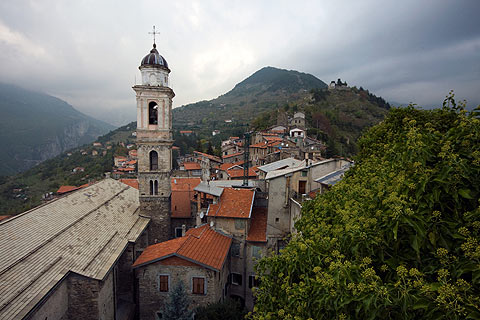 Apart from the village itself, noteworthy highlights include:

Triora was strongly marked by the events arising from the witchcraft trial that involved many women of the village. In the small town center the Ethnographic Museum of Witchcraft has been set up to reconstruct the ancient rural life and the records of the famous trial of 1588, still much discussed by writers and critics, and immortalizing the memory of an event that has been likened in importance to the famous Salem witch trials.

The museum is not only about witchcraft - for example it also also holds interesting prehistoric and animal remains from the same area.

In 1588 there was a famine in the region, which the Inquisition blamed on many of the local women. Hundreds of the women were then denounced as witches, many of them tortured, and more than 10 of them burned at the stake.

It is worth remembering that there is more to Triora than witch trials! The village boasts an impressive cultural and artistic heritage including the church of Santa Maria Assunta and the oratory of San Giovanni Battista that are both worth visiting.

The Collegiate Church of Triora, dating from the 16th century, was extensively renovated in the late18th century. Inside there are remarkable works of art, among which a painting on wood by the Sienese painter Taddeo di Bartolo [1362-1422] stands out - he was active in Liguria towards the end of the 14th century, and in 1397 painted a grand picture of “The Baptism of Christ" for the Collegiate Church.

Close to the Parish Church is the Chapel of Saint John the Baptist. In this small chapel there are sculptures by Anton Maria Maragliano [1664-1741], the creator of a beautiful wooden crucifix, and other works by Taddeo di Bartolo. Anton Maria Maragliano enjoyed wide respect and esteem by eminent men of his time. 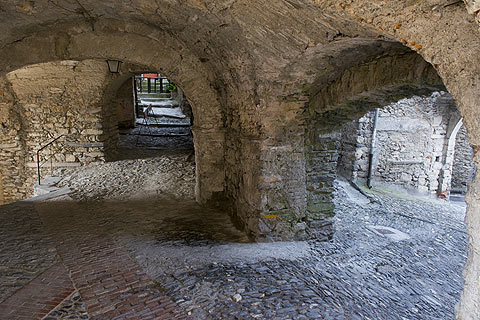 In the Chapel a work attributed to the Genoese painter Luca Cambiaso [1527-85] stands out, representing the "Virgin Enthroned with Saints Vincent Ferrer and Dominic. The chapel also houses a precious wooden altar that contains a picture of the "Nativity of St. John the Baptist" by local painter Lorenzo Gastaldi [1625-1690].

Other monuments and sights of interest in Triora

Finally, the ruins of what remains of the five fortresses of Triora, the “Fortino” [Blockhouse] and the Castle of Triora are also very evocative, and these "ruinae" further enhance the mysterious charm of the medieval small town.

Triora can be a real "discovery" for nature lovers. The vegetation is extremely diverse, consisting of pine, chestnut, oaks, firs and larches, where you can make excursions along scenic trails in the open countryside. The fauna is very rich in insects and birds such as grouse, pheasants, and birds of prey in an area considered a natural habitat worthy of study for specialists.

...and speaking of “specialties”, no one can or should leave Triora without having first tasted the typical bread and mountain cheeses of one of the most ancient villages of Liguria, with an ancient past fading into mythical traditions.

See also Triora history and etymology (and for explanation of works cited).

Triora is about 15 miles north of San Remo, along a road that passes through very picturersque scenery. Most visitors come here as a trip from San Remo, itself a pleasant resort, or one of the other coastal resorts on the Liguria coast.

Map of Triora and places to visit

Places to visit near Triora 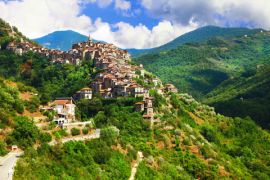 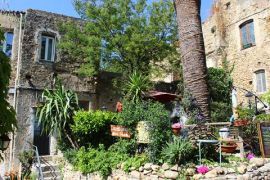 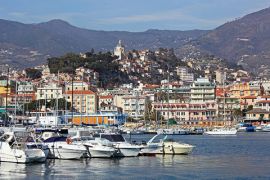 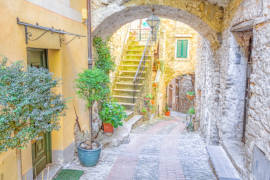 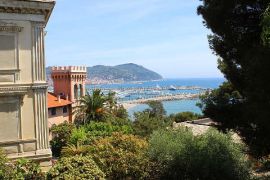 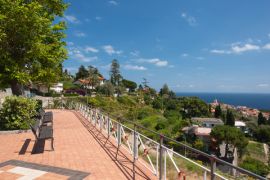