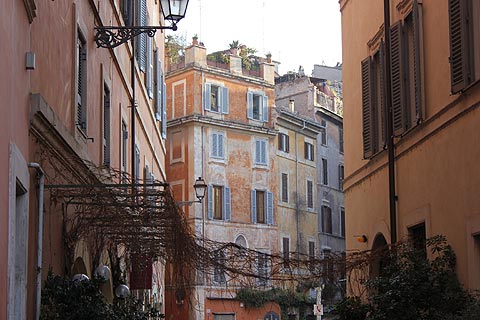 The Trastevere district of Rome is the part of the city to the west of the river Tiber and south-east of the Vatican.

Trastevere is easily reached from central Rome across any of several bridges: Ponte Sisto, Ponte Garibaldi, Ponte Palatine or the two bridges that connect the island in the middle of the river to the river banks.

The whole Trastevere region is characterised by its narrow streets of colourful houses, its numerous open squares and narrow alleys, and the plants and historical features that can be seen all around.

It is perhaps above all known for its numerous restaurants - there are far too many restaurants for us to make individual recommendations, but be assured that whatever your budget or taste you will find something suitable among those available in the streets of Trastevere.

Because it is the restaurants that attract the most crowds to Trastevere it is during the evening that it is at its liveliest, but be sure to also visit during the day time to enjoy the sights and sounds of this ancient region, and some of the individual highlights.

There are several notable sites in this part of Rome so allow plenty of time for a visit:

Church of Santa Maria in Trastevere

In the heart of the Trastevere district there is a large open square with the Church of Santa Maria to one corner.

This church is of great historical interest, being one of the oldest churches in Rome (and in the world) with origins dating back to 340 AD - and on the site of a Christian meeting house that stood here from 220 AD.

According to who you believe this could possibly be the first church in the world to openly celebrate mass.

Much of what we see today dates from the 11th - 12th century, after the original church had been destroyed. The new building incorporated some ancient elements, such as the columns along the nave that are Roman in origin (thought to be from the Baths of Caracalla).

The outside of the cathedral has some colourful 12th century mosaics along the upper part and statues along the balcony below, which in turn are above a series of arches (18th century). In the 'porch' area behind these arches there are numerous fragments of ancient engravings embedded in the walls.

Inside, the decoration of the church is quite exceptional, with artworks and wallpaintings covering almost all available surfaces and a richly gilded and painted ceiling.

The apse / altar area is particularly impressive, with extensive mosaics continuing into the vaulted ceiling while to the left of the altar is a separate chapel that also contains very beautiful frescoes on both the walls and ceiling.

On the western bank of the Tiber towards the north of the Trastevere region you can visit the Villa Farnesina.

The villa was built for a rich banker in the early 16h century. While the outside is attractive it gives little clue to the level of decoration to be found inside the villa, with many frescoes and paintings by leading Renaissance artists decorating the walls and ceilings of the large rooms.

The ensemble is now recognised as being one of the most important examples of renaissance art to be found in Italy.

On entering the villa you quickly pas into the Loggia of Galatea, which contains the very important painting by Raphael called the 'Triumph of Galatea', really quite an extraordinary work of art and radical when it was painted for the realistic way in which it portrayed beauty and movement (only a small part of the whole painting is shown in our photo).

The other rooms in Villa Farnesina portray numerous mythical stories and historical events, and also incorporate various artistic techniques - for example there is a room with large paintings demostrating perspective techniques to give the illusion that you are looking out between large columns and on to a rural scene.

Note: Villa Farnesina is only open 9am - 1pm so you might like to make it an earlier part of your tour of Trastevere.

Views across the city

After completing your tour of Trastevere we suggest that you also take a stroll up the hill behind the region (to the north-east), for the exceptional views across both Trastevere itself and across the skyline of Rome.

Centred around a light beacon called the Faro al Gianicolo, there is an extensive area of balconies with 180 degree views that stretch across many of the famous Rome landmarks, and to the mountains beyond (the photo above is just a small part of the panorama).