Syracuse cathedral is an important cathedral in the centre of the town of Syracuse, in south-east Sicily, and one of the most important baroque buildings in the regon.

Italy This Way comment: the cathedral at Syracuse is a remarkable building that incorporates several contrasting styles that together create one of the most interesting cathedrals in Sicily, perhaps even in Italy

The most remarkable building in Ortigia, the historic region of Syracuse, is the beautiful Cathedral of Syracuse. The cathedral combines an ancient Greek temple with a roman style interor and a baroque facade and decoration to create a unique style of structure: remarkably the combination of these very different styles together creates a very lovely cathedral. 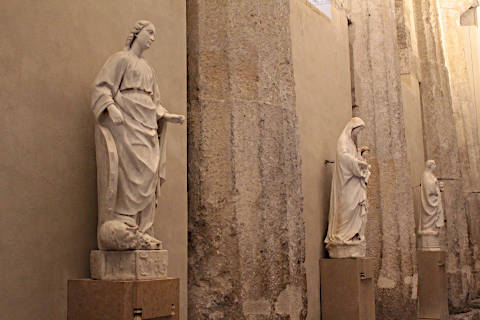 Now situated on the Piazza del Duomo, the cathedral is at the top of a short flight of stairs. It was originally built on the site of an ancient temple dedicated to the goddess Athena (Minerva), built in the 5th century, that had 14 columns along the sides and six at each end. The main body of the current cathedral, that incorporates the original columns, was built in the 7th century.

Before entering the cathedral you will want to spend some time looking at the facade, which is a very impressive example of baroque architecture: The façade was rebuilt in 1728 in baroque style after the earthquake of 1693 and has two levels. The facade incorporates corinthian style columns and several statues as well as decoration in the baroque style.

In Norman times, the cathedral was transformed with the building of the walls of the nave and new window openings being added, and the apses were also covered with mosaics. The original temple was incorporated as part of the cathedral building, and the temple columns can still be seen along the outer wall of the cathedral. Between the columns there are now statues of various saints in the classical style, from the 16th century.

Inside the cathedral there is a main nave and two side naves, and a baptismal font of white marble which was found in the catacombs of San Giovanni and bears the name of the 7th century Bishop Zosimus. The walls separating the naves are in the roman style and each has a row of round arches, with smaller arches above including windows that allow light to enter the cathedral.

The walls are of dark stone in the main nave, which contrasts with the areas such as the dome that are painted and frescoed. In the vestibule, baroque columns were added in the 18th century that have a spiral pattern and are decorated with vines and grapes - a striking contrast with the simple design of the main columns from 2500 years ago!

The mosaic decoration of the floor is very colourful and has several different patterns - this was added in the 15th century.

In the two side chapels you can see a beautiful picture by the painter Agostino Scilla (1629-1700) and a statue of Saint Lucia, the Patron Saint of the city, adorned with gems donated by believers, made by Pietro Rizzo in the 16th century. Among the other precious objects in Syracuse cathedral are a calyx of amber, the 13th century painting of the crucifixion in the crucifixion chapel and a book of parchment decorated with golden letters.

Also noteworthy in the cathedral are the statues (the Virgin of the Piliere in the centre, Saint Lucia on the right, San Marziano on the left), and works by Ignazio Marabitti. You can also see the Sacrament Chapel (17th century), attributed to Giovanni Vermexio: the chapel is polygonal and has a barrel vault with frescoes by Agostino Scilla (1657) and a ciborium by Luigi Vanvitelli (1752) [1700-1773].

Close to here is the Chapel of the Crucifix, with a rectangular plan, from the 17th century. The high altar, added during the Baroque period, is also attributed to Giovanni Vermexio. 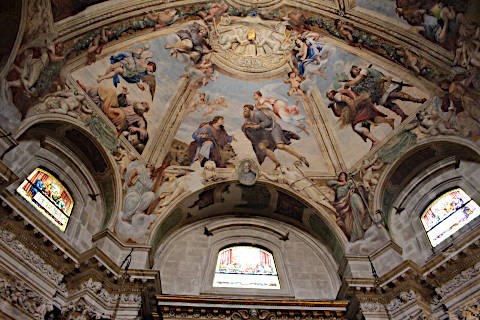 The Ortigia area of Syracuse is very interesting to visit, and very beautiful, with a great deal to see: see the Syracuse guide for details, and other places to explore in this region of Sicily.

Map of Syracuse cathedral and places to visit

Places to visit near Syracuse cathedral 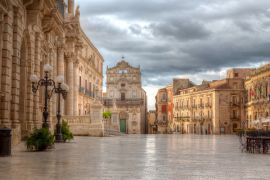 Syracuse has UNESCO World Heritage status because of the importance of its historical centre. 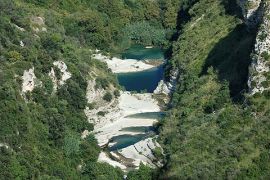 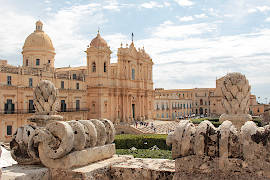 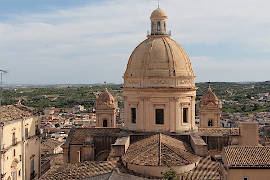 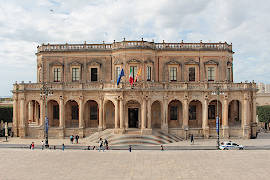 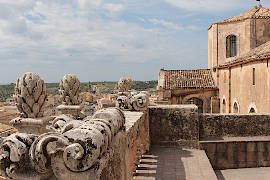