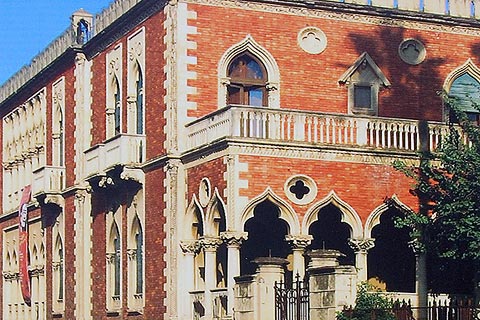 The town of Reggio Calabria is situated in the far south of the country, close to the crossing to Sicily. It is the most important town in the Calabria region, and has a significant historic and architectural heritage to discover.

Visiting Reggio you can not ignore a visit to the National Museum, one of the most important Italian archaeological museums and the place where all the archaeological remains of Reggio are preserved.

The famous "Riace Bronzes" are the most valuable work of the Museum. The two large bronze statues found in the early 1970s in the Ionian Sea, near the coast of Riace, are the pride of the Museum of Reggio: both are Greek original works and represent two warriors, created at different times: statue "A" dates back to the beginning of the fifth century BC. while statue 'B' dates from the end of the fifth century.

There are not many archaeological discoveries here from the ancient city of Rhegion that originally stood here because the modern city covers part of the site where the ancient city was founded by the colonists from Chalcis. The archaeological remains that do exist are represented by walls with square blocks of sandstone more than 70 meters in length, probably dating from the mid-fourth century BC.

There are also remains of Roman Thermae (baths), which had two-colour mosaics with geometric decorations. In addition, many vases and terracotta figurines of the goddess Demeter have been found. A slab of polychrome terracotta representing two dancers, dating from the late sixth century BC and once part of a temple, is very important. Among the votives of great value from this period we also have some “lekythoi” [= red figured vases].

Art in Reggio is well represented by its religious buildings and castle. The principal monuments of interest include:

The Cathedral of the Assumption

The Cathedral of the Assumption has a neo-Romanesque facade and a Gothic style ceiling. In the central part there is a 'three-light' window topped by a rosette. In the centre the staircase that leads to the large and impressive facade is intersected by four turrets surmounted by cupolas, where you can see statues of St. Paul and St. Stephen of Nicaea, by Francesco Jerace (1854-1937), a sculptor from Naples [1].

The cathedral interior has three naves, with a coffered ceiling. In the left aisle there are tombs of various local bishops from the 17th century and in the chapel at the bottom of the altarpiece is the 'Assumption' by Joseph Crestadoro or Cristadoro (1730? -1808). In the apse there are some bronze reliefs depicting scenes from the Old and New Testament by Antonio Berti (1904-1990).

Among the buildings of considerable tourist interest is the medieval castle, with the remains of two massive round towers and part of the walls added in the Aragonese period (15th century). Over the centuries the castle was conquered by the Arabs, Normans, Swabians and Angevins.

After many wars between the Angevins and Aragonese some restorations were carried out during the 14th and 15th century, under the rule of the Aragonese. Significant improvements were also made to the castle under the reign of Charles V to counter the Turkish raids.

The Church of the ‘Ottimati’

Among the other churches of special interest we include the "Church of the ‘Ottimati’" [ so-called because it was here that the elders of the city met], with three naves and a mosaic floor. The temple was rebuilt in the mid-20th century with an Arab-Norman style and has a Latin cross plan with three naves.

Although of medieval origin, the Church of the Ottimati was rebuilt in the 18th century with elements of the mosaics of the Byzantine church of Saint Gregory the Great, dating from the 12th century. The Church is located near the castle.

The imposing facade is characterized by a portal flanked by two columns with a Gothic arch and a Gothic rose window. The imposing bell tower stands out, and the marble Cosmatesque pavement is certainly one of the most important mosaic works in Italy, and, according to recent studies, dates back to the time of Count Roger [1031-1101] [2].

For nature lovers, Reggio Calabria has easy access to seascapes of great charm, while for those who want to follow a spa treatment we recommend a visit to the source called S. Elijah, with clean water which seems to have great results on the regulation of metabolism.

For gourmets, the first thing you will notice is that the local cuisine in Reggio is based mainly on fish (bluefish, tuna, swordfish) caught daily in the Strait, while the mountainous regions offer products derived from the pastoral and peasant economy.

Traditional local cuisine includes the so-called "“maccaruni ‘e casa” ", hand made macaroni. It seems that the preparation of this dish was known even in ancient times and this tradition was continued by the Arabs, who used ingredients like sauce, fresh tomato fish or seafood ...

Map of Reggio Calabria and places to visit

Places to visit near Reggio Calabria 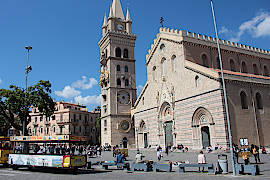 Damage from world wars and earthquakes has been extensively repaired according to the original plans. 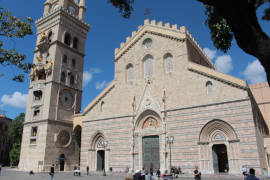 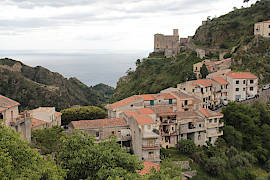 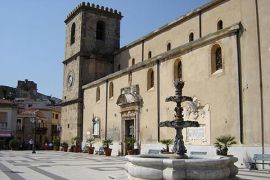 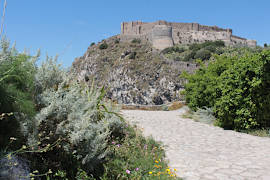 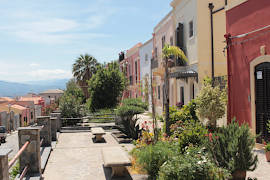