Compared with many in the region Realmonte is "young" town, only dating from the mid 17th century, but the same thing can not be said of the area in which it is located, with traces of prehistoric settlment and an important roman villa. The combination of beaches, beautiful coast and historic sights make Realmonte an interesting destination for visitors to Sicily.

Realmonte is best known as a beach and seaside resort, and close to hand you can find some of the most attractive coast in Sicily, with sandy beaches and attractive limestone cliffs. But there are also many sites of historical interest both in the town and nearby so we do suggest you find the time to explore while you are here.

For those who love sea resorts, Realmonte has many beaches such as that of the “Scala dei Turchi” ,  (Turkish staircase) which is particularly striking because of its form as a natural staircase, with a succession of broad steps and terraces that slope down the rock to the sea below. It is definitely one of the top beaches in Sicily and not to be missed if you are on this part of the island. Indeed it is one of the most distinctive beaches in all of Italy. 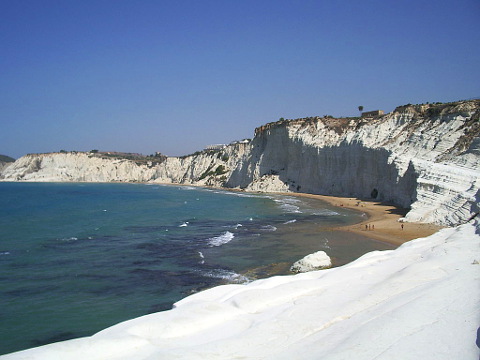 The Gelonardo beach is east of the seaside resort of Siculiana Marina and has a very long coastline, bordered by a cliff formed by banks of gypsum crystals which create a stunning play of light throughout the day. Another of the popular local beaches is the one at Pergole between Siculiana Marina and Realmonte.

Studies have shown that during the Quaternary period many links existed between Africa and Sicily, and comparisons between Realmonte and “Capo Rossello” have uncovered human remains belonging to a type of Australopithecus "Africanus," the ancestor of the genus “Homo”.

Some pebbles dating from the Palaeolithic have been identified as being from the so-called "Pebble Culture," which is considered the oldest form of human culture, dating back in Italy about 750,000 years. The Pebble Culture is the earliest stage of the prehistoric Stone Age.

Realmonte can also boast another unique archaeological find - a Roman villa that was discovered thanks to Japanese archaeologists. The Villa is located a few kilometers from the “Scala dei Turchi”, near the sea, and shows that the coast here was important in Roman times not only for economic and commercial reasons but also from the residential point of view.

The proximity to the sea shows that it was a summer villa that belonged to an important member of the Roman aristocracy. This discovery of a Roman villa on the coast of Realmonte was a great source of surprise and excitement, in particular the discovery of "sectilia pavimenta” - black and white mosaic floors - one of which depicts Neptune, the god of the sea, with the trident, riding a dolphin, framed into geometric borders. Roman coins, one dating back to the Emperor Domitian, have also been found.

The motifs depicted in the mosaics are inspired by Sicilian mythology, as seen in the scene of the fight between Scylla and Charybdis. Also of great artistic value is the "mosaic of the Dolphin". According to scholars the mosaic is the work of a local art school, probably from Agrigento. The villa also had a thermal swimming-pool, usually only found in the "Domus" of the richest citizens.

The villa, built around the end of the 1st century AD, covers an area of 5000 square meters, although its structures also extend further north. There are a series of square or rectangular rooms arranged around a peristyle with five square columns on each side. The peristyle was surrounded by a covered passageway, which opened onto the different rooms.

In the northern wing there is a large central room, with traces of “opus tessellatum” on the floor, and with a large opening on the south side where the “tablinum” (the main room, used to receive guests) was found. To the sides, symmetrically arranged, there are two private smaller rooms, probably the "cubicula" (bedrooms) with a floor in “opus sectile”, preceded by their ante-rooms with black and white geometric mosaic on the floors.

In the west wing of the villa there are other important rooms, such as the "triclinium" (dining room), with mosaic floors in geometric black and white, with friezes and leaves. To the west of the "triclinium", a room features a floor mosaic in black and white, depicting Poseidon with a trident and surrounded by dolphins in the central panel. Around it are various ornaments and other decorations depicting crenellated walls.

The villa was surrounded by a wall that reached the beach and enclosed the landing-stage. At the spa there is a corridor leading to the dressing room ("apodyterium") with a mosaic floor decorated with Scyll holding a rudder and surrounded by sea creatures. As in the mosaic of Poseidon, this also is adorned with decorative patterned friezes.

The adjacent room with mosaic floor, was the "frigidarium" giving access to a circular room lined with marblewhile in the south wall a door led into a hallway from which they entered a small heated room (“calidarium”). 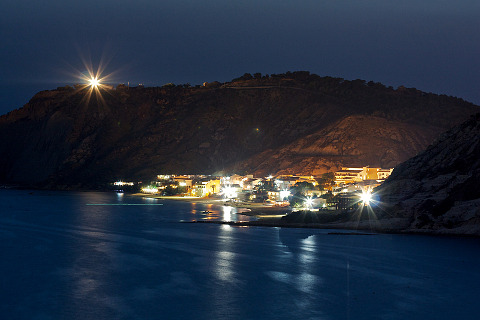 The Realmonte salt mine and cathedral

There is a huge underground salt mine at Realmonte with kilometers of tunnels the walls of which have formed natural swirling patterns and stripes due to layers of salt deposits and erosion. The tunnels are a photographers paradise and you may well have spotted them on instagram. As well as the tunnels there is an underground cathedral complete with an altar, crucifix and frescoes that was carved by the mine workers.

Unfortunately the mines are still working mines and so visits are extremely restricted.  Usually they are opened one day a month only for 30 visiors! If you wish to visit contact the mine owners.

Theatrical events are held every year in the Costabianca theatre carved into natural hollow in the cliff.

You can continue your visit with a trip to the archaeological site of the ancient town of Erbesso, which was located on the hill south of Realmonte and where today there is a lighthouse. Erbesso was the "store" for the Romans during the Punic War I, but was later destroyed by them and disappeared.

Another ancient building in this area is the "Tower of Monterosso," a tower of Arab origin from the 16th century, still well preserved and located on the same hill as the “Scala dei Turchi”. The tower has a square plan of about 12 meters per side, divided into three rooms.

Where is Realmonte and places to visit nearby

Located between the mouths of the river Platani and Salso, Realmonte is a small town near Agrigento in south-western Sicily. Perched on the side of a mountain Caltabellotta is dominated by the ruins of an ancient Arab fortress.

Map of Realmonte and places to visit

Places to visit near Realmonte 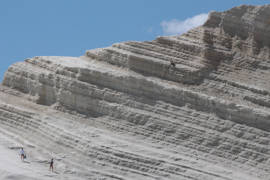 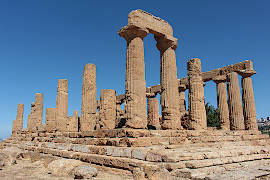 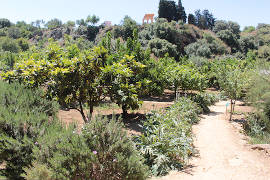 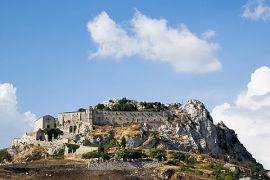 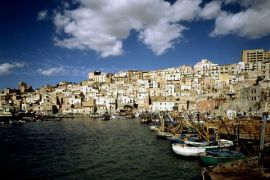 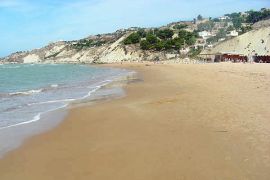