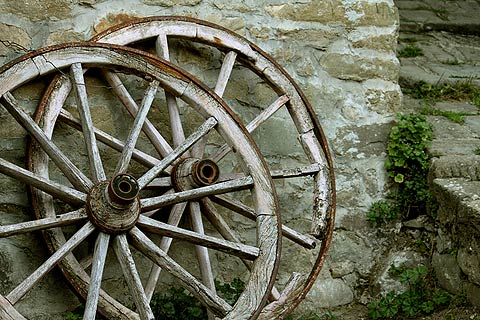 Raggiolo, in the Casentino area of eastern Tuscany, is a village on the mountain side between the Teggina and Barbozzaia torrents, at a height of about 600 meters and east of Pratomagno. The village is linked with Ortignano, thereby forming the small town of "Ortignano-Raggiolo", with its own distinctive traditions.

Sprawling down the slopes of a wooded hill, the village is small but the centre is picturesque with traditional houses and steep narrow streets to explore.

Raggiolo has a historic centre with some sites of interest from the artistic point of view and also the chance to appreciate the ancient traditions of the region that are associated with the production of iron and chestnuts. The historic center of Raggiolo remains intact and is centred around the very old Church of Raggiolo:

"Archaeological excavations have identified the foundations of the early Roman Church, which is  single nave with a semi-circular apse, dating from the 11th or 12th century; the side chapels and aisles date from the 17th century, with remnants of buildings that date back to the fourth and second century BC.

The medieval part of Raggiolo includes the facade of the Church of San Michele, created from the old palace of the Earl Guido Novello and retaining elements from the earlier building such as the Gothic portal, with a massive lintel surmounted by a crest of the Wool Guild of Florence. The church became a parish church in the first half of the 18th century at which time renovation and expansion were carried out and the building was enlarged.

The church has three naves of equal height with three spans. The aisles are divided by four square pillars supporting vaults with low arches connected by metal chains. The pillars are covered with decorative painting of faux marble. The altar on the right contains a polychrome plaster statue of the Sacred Heart of Jesus placed in 1921, with the Madonna and Child dating back to the 16th century, inserted in the center of a marble slab on Adoration of the Angels to the left.

There is also a small rectangular shrine with stucco dating from the 17th century, in which is enclosed a wooden statue of the patron St. Michael defeating the dragon. Another important stucco decoration, with a half-length Madonna seated with the Child, is by Michelozzo di Bartolomeo Michelozzi (1396-1472), Donatello's assistant.

The apse of the church, from the outside, is supported by a large pointed arch under which we can see two windows belonging to the medieval palace of the Earls Guidi. On the right of the church is the bell tower with the inscription AD 1829 on the base, the probable date of the restoration of the bell tower.

Among the ancient crafts of Raggiolo the manufacture of iron and production of weapons were important:

"The production of weapons explains the nature of the pacts made by the inhabitants of Raggiolo with Florence (...) Later the tradition of work related to iron and production of weapons gave way to a kind of pastoral economy, linked to the exploitation of the great chestnut forests "(See L. Borri Cristelli, “Arte e devozione in Casentino tra '400 e '500 ...”, Marsilio, 1998, p. 74).

Chestnuts are cultivated on a large scale throughout the Casentino region and you can learn more about the industry at the “Ecomuseo della Castagna” [Eco-Museum of the Chestnut]. The museum is open from June to September and has various sections which show an operating mill among other things. The factory has been reactivated and you can watch the different stages of milling.

The so-called 'Feast of the ‘Castagnatura' in Raggiolo at the end of October is also related to this important historical and economic activity.

The village is in the heart of the forested Casentino region. It is to the east of Florence, and to the west of Bibbiena, the largest town in the immediate area.

Map of Raggiolo and places to visit

Places to visit near Raggiolo 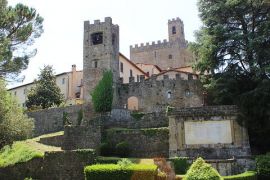 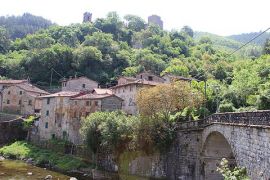 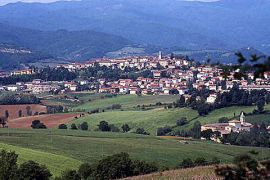 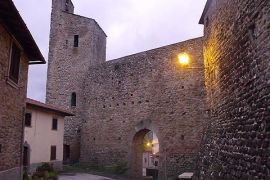 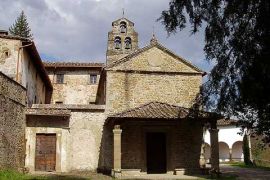