The pretty port town of Portovenere, on a peninsula on the coast of north-west Italy in Liguria near the border with Tuscany, is a very picturesque village set on a slope behind a traditional harbour, with lots of beautiful tall and colourful houses and some quaint streets to explore in the old town as well as being surrounded by beautiful coastal scenery and overlooked by a castle.

The surrounding scenery and coastline is so exceptional it has been listed as protected by UNESCO.

Portovenere is a town with three histories: first the town was a Roman staging post on the route to France and Spain, then later it became a fishing village, then in the early 20th century Portovenere started to attract the artistic community, and is well known for its association with Byron and Shelley.

The first thing you will notice if you arriving here from the Cinque Terre villages just along the coast is that there is a large car park near the centre so while parking can still be a bit difficult in the summer, it is much easier than in the tiny coastal villages!

As soon as you approach the harbour you can see why Portovenere is so popular with visitors: the view along the seafront houses and across the water, with the church on a headland below, is an exceptional sight. Your visit will start with a stroll along the waterfont admiring the houses - perhaps the tallest, thinnest and most colourful houses I have seen - and gazing out across the harbour

We didn't see anyone rich and famous in Portovenere but the size and luxury of the yachts in the harbour suggests they are hidden away here somewhere - perhaps we don't eat in the best restaurants because curiously our paths never crossed! 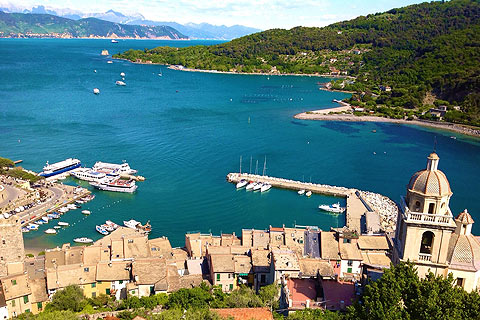 This multi-coloured seafront to the town with the harbour in front is especially attractive in the early evening, when the colourful houses catch the evening sun, but unmissable at any time when you are visiting the region - one of our favourite views on the Ligurian coast.

Continuing along the waterfront you reach the headland. The small church of San Pietro here is in the gothic style and dates from the 13th century although it was built on the site of a much older roman style church which itself is believed to have been on the site of a pagan temple. Take a look at the unusual bronze doors of the church before entering to admire the striped stonework and multiple arches and vaulting inside. To the right of the church you can look at the stunning coastal views towards the Cinque Terre through the arches of the porch.

Also on the headland you will notice a small doorway through a stone wall which leads to Byron's cave. It is said that Byron, the famous early 19th century poet, used to sit here to think and that it was from this bay that he swam across meet Shelley in Lerici.

Walking now up the hill behind Portovenere you can see the Church of San Lorenzo, that dates from the 12th century. Note in particular the sculpture above the doorway of San Lorenzo being burned alive. From here you can continue to the castle and the defensive walls and towers.

Of course, from the castle you get more lovely views along the coast - but perhaps less so than from the end of the headland next to the church or from the road that heads out of Portovenere and has lovely views across the whole town and harbour... 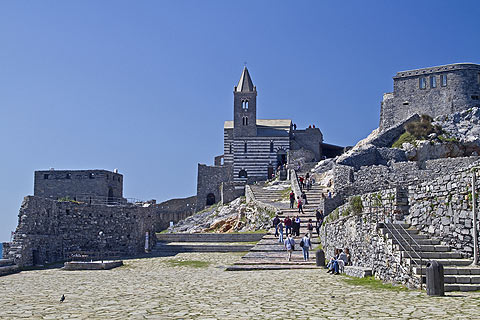 From the castle you can descend directly towards the harbour, passing down a long flight of steps to reach the old town. Although it is quite compact the streets of Portovenere old town are very attractive and you can find various shops and cafes although most of the shops are rather targetted to tourists and we suggest you buy your picnic elsewhere because we found them rather expensive!

To complete your visit you can return to Portovenere harbour for a coffee or some fresh seafood in one of the restaurants.

There is a great deal to enjoy along the coast in the region around Portovenere and in the Regional Natural Park of Portovenere, with Lerici and the villages of the Cinque Terre close to hand (and exceptionally scenic), and towns such as Rapallo a little further to the north-east.

If you have time available there are various boat trips available from the harbour either to Lerici or the villages of the cinque terre, or as a tour around the small islands of Palmaria, Tino and Tinetto just off the coast. The two smallest of these islands, Tino and Tinetto, both once held monasteries but neither is now occupied.

The port town of Portovenere is on the Liguria coast of north-west Italy, on a peninsula to the south-east of the world-renowned Cinque Terre villages and close to the border between Liguria and Tuscany.

Map of Portovenere and places to visit

Places to visit near Portovenere 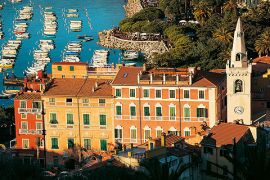 With its picturesque harbour, village centre and castle Lerici is a popular excursion from the Cinque Terre villages 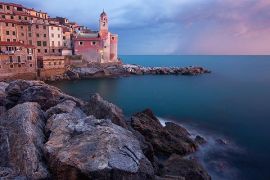 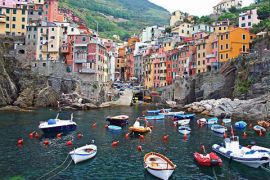 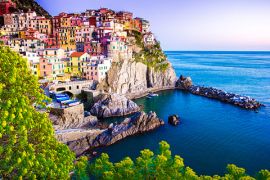 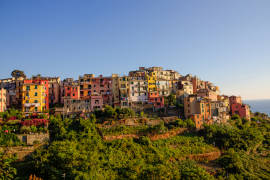 On a raised rocky promontory, the ancient village of Corniglia is one of the Cinque Terre villages 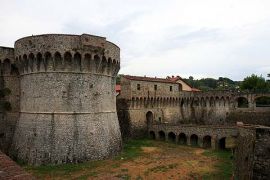