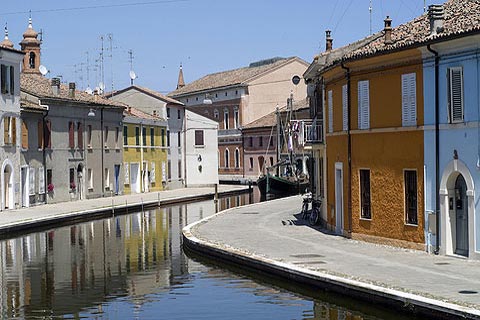 The Po Delta is a predominantly natural area to the east of Ferrara and north of Ravenna, in the north-east of the Emilia-Romagna region of Italy, where the River Po divides into several smaller rivers before meeting the Adriatic Sea.

Much of the Po Delta is now protected, either as part of the large Parco del Delta del Po, or by one of the smaller nature reserves that are found in the region, and is also designated as a World Heritage Site.

Of course, although we mention some of the specific characteristics of the region below it is really the overall beauty of the valley landscape of the Po Delta that is interesting to see, with large expanses of water populated by many species of birds and further enriched by the jagged profiles of picturesque islands and their vegetation which provide a great beauty and charm that varies according to the ever changing conditions of season, climate, light.

Above all the region is known for the wildlife, and in particular the birds that are found in the wetlands and lagoons, with several thousands of species having been identified in the region. Many of these birds are very rare, and ornithologists from all over the world visit - especially for the bird-watching fair based around Comacchio at the end of April each year.

Those who visit the Po Delta and wish to immerse themselves in nature can visit the remarkable spectacle of the Comacchio Valleys which have a unique atmosphere, with hundreds of birds that live in the lagoon (such as purple herons, mallards, moorhens, coots, and cormorants, a recent arrival).

The wetland area has a unique vegetation with the landscape including trees such as oak, pine, tamarisk, beech and cane.

The Po Delta Valleys together form a huge complex of coastal dunes which act as natural defences against sea erosion and are very important from the naturalistic point of view. The Comacchio Valleys also act as a kind of natural refuge for some forms of natural life that have now largely disappeared.

The S309 road that runs from north to south through the region is a good base to start your explorations, and also provides access to some of the small towns and beach resorts along the coast. If you prefer to explore without your car, there are numerous other possibilities - the region is ideal for cycling, walking and boat trips. Perhaps the best cycle route is the 80 mile trip along the bank of the Po river.

During the trip you can stop to taste the typical dishes of Comacchio such as the fish, especially eels, which have been caught in the valleys for centuries. Mullets, sea bass and flounder are among the other species of large fish in the former marshes of Comacchio.

It is said that the Duke Ercole I (1431-1505) sent the Lord of Rimini one hundred salted eels for lent each year.

The local fish dishes for you to enjoy are numerous, along with oysters, mussels, clams, lobsters, shrimps. Among the traditional pasta dishes are seafood risotto, spaghetti with crab, fish soup and grilled fish, and eel risotto.

Comacchio itself is a pretty fishing village (the local specialty is eels) with several narrow canals, a famous 17th century bridge that crosses three of them, and fish restaurants where you can sample the local produce.

Also worth visiting is the abbey at Pomposa to the north of Comacchio which houses some impressive frescoes and mosaics and also has a collection of interesting buildings around the abbey itself.

Map of Po Delta and places to visit

Places to visit near Po Delta 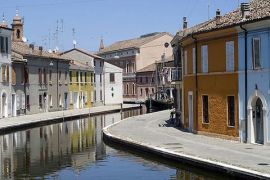