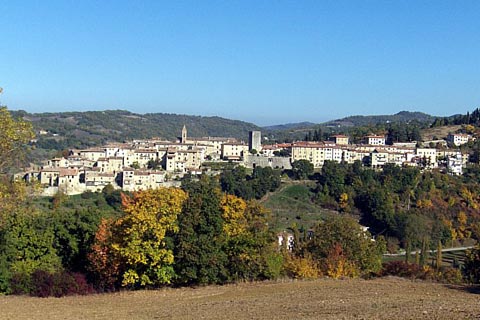 The small town of Petralunga is north of Perugia, and to the north of the Umbria region of central Italy.

The old city centre of Pietralunga stands out in particular because of the the remains of the fortress, built in Lombard times around the 8th century. Inside the walls of the fortress are the donjon, the living quarters for the troops, the kitchens and stables.

The donjon is 19 meters high and is the best preserved part of the ancient Lombard fortress. This massive construction of irregular pentagonal shape is formed by walls of hewn stone cemented with lime and reaches a thickness of about 1.50 meters.

Adjacent to the fortress you can see some important palaces such as the Fiorucci palace (early 17th century) and the Town Hall, built between 1498 and 1502 and used by the Knights of Malta until 1888 when it became the seat of the City Hall of Pietralunga.

Continuing along Via della Pieve you reach the Palazzo del Capitano del Popolo, built in the early 15th century, and also the palaces of the Felicchi and the Bonori, dating from the 14th century.

The most important church in Pietralunga is the romanesque style Parish Church of Santa Maria, dating from the 7th -8th centuries. The church has a single nave with  large ridges supporting ogival vaults.

On the right wall of the nave there is a fresco attributed to Raffaellino del Colle* (1473-1524), depicting the "Martyrdom of St. Sebastian", while the chancel retains a copy of the famous polyptych by Ottaviano Nelli* (1375-1444).

You might also find it interesting to visit the church of the Monastery of St. Augustine, dating from the 13th century. The structure of the monastery and the church have been restored and turned into the Municipal Public Library, and the old hospital is now used as the Centre for Historical Documentation and Historical Archive of Pietralunga.

Outside Pietralunga city walls is the shrine of Our Lady of Remedies, a religious building and an object of intense devotion because it it is said that Saint Francis (1182-1226) stopped here during his pilgrimage from Assisi to Gubbio and La Verna (an important medieval road passed through Pietralunga that connected the Tyrrhenian to the Adriatic coast).

Also visited by pilgrims and not far from Pietralunga is the Pieve de’ Saddi. This church is a long rectangular building divided into three naves that are separated by massive columns.

Covered with a beamed ceiling and decorated with a semi-circular apse and a narthex porch this building is a typical example of early Christian basilica, dominated by a ninth-century tower that rises over the valley.

According to legend, Sain Crescenziano, was martyred in Saddi for preaching the Christian faith while fleeing from the persecution of Diocletian (244-311 AD). Inside the church, on the left wall, is a bas-relief depicting St. Crescenziano slaying the dragon.

The region around Pietralunga

Surrounded by the landscape of oaks, maples and conifers which cover the hills of the Umbrian Tiber region, Petralunga is the centre of an ecosystem that houses some rare species such as the Apennine wolf. The Forest of Pietralunga is an area shaped by the Carpina stream and its tributaries, and together these this create a natural environment of great attraction for nature lovers.

You will also discover traditional crafts and products as you explore, including many types of truffles, such as the white truffle (also called Trifola). Another traditional product is the famous "Potato of Pietralunga", from which one of the most delicious local dishes is prepared, the “gnocchi with truffles.”

Pietralunga also offers other local specialities such as salami and various cheeses, the “cappelletti”, the so-called “Torciglione”, and legumes such as lentils and grass peas.

Map of Pietralunga and places to visit

Places to visit near Pietralunga 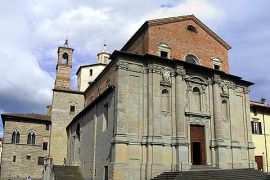 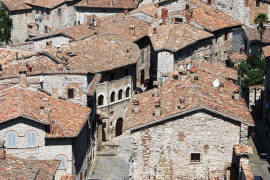 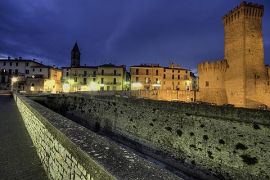 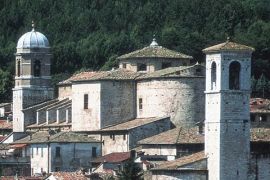 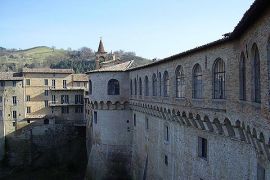 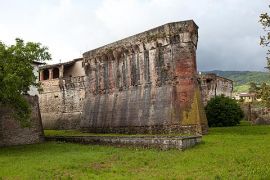