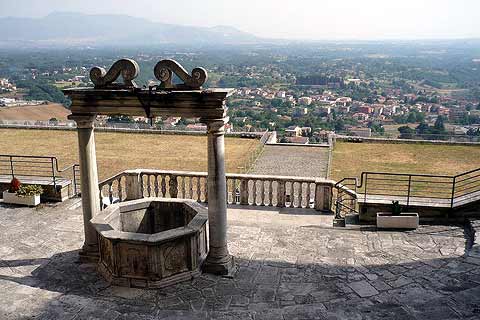 Palestrina is an important historical town in the Lazio region of Italy, to the east of Rome.

Palestrina has an interesting range of buildings to discover, including an important ancient sanctuary, and an impressive museum of art and archaeology.

A visit to Palestrina can start from the famous Roman Sanctuary of Fortuna Primigenia, an imposing and complex architecture built in the 2nd - 1st century BC and one of the most important shrines from the classical age. 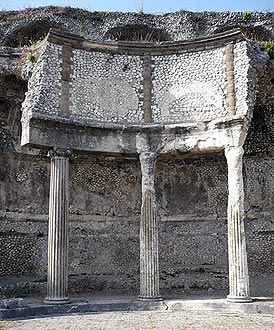 It is a work of exceptional technical and stylistic merit and one of the most majestic and imposing examples of Hellenistic architecture in Italy.

The structure was inspired by eastern styles, as characterized by the importance of view from the front which integrates the spectacular building and the landscape.

The 'Cave of the Sorti’, a small cave where encrypted blocks were found - the so-called ‘Sorti of Praeneste' - is particularly important here, while the upper part has terraces connected by ramps and stairways.

Another destination of great interest in Palestrina is the'Colonna–Barberini' Palace. The original Colonna-Barberini palace was built by the Colonna on the structure of the Fortune Primigenia shrine around 1050, when the family settled in Palestrina.

This building was destroyed in 1298 after a year long siege when Palestrina was razed by order of Boniface VIII, who had ordered the confiscation of assets from the Colonna after they opposed his election.

The city was quickly rebuilt and with it the residence of the prince, but it suffered a second disastrous devastation in 1437, this time by Eugene IV (1383-1447), who came into contention with the Colonna and gave orders to Cardinal Vitelleschi, head of the papal troops, to move on Palestrina.

A few years later the adjacent church of Santa Rosalia was built by Francesco Contini (17th century) - the church was commissioned by Maffeo Barberini (1568-1644) in thanksgiving for the salvation of the city from a plague epidemic.

For a long time the church contained the “Pieta Barberini” by Michelangelo, now in the “Galleria dell'Accademia” in Florence.

Art works in the Colonna–Barberini palace

We have included rather a lot of detail about the art works - please pass this section if you are not interested! Within some of the palace rooms there are remarkable frescoes attributed to the school of the Zuccari. 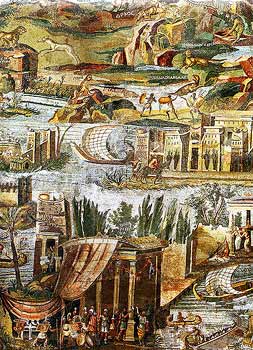 Note in particular the first floor room to the left with a decorated vault, which has at the centre Parnassus with Apollo, while to the sides Venus's chariot is drawn by doves and pulled to Juno by peacocks.

In the lunettes there are landscapes and marine scenes within medallions, set around the arms of the Barberini.

Among these paintings there is  an interesting view of Palestrina, which gives us the appearance of the city in the early 17th century.

On the other side of the second floor is the trophy room, where the decoration was done in two stages; originally it was to be a frieze high on the walls, with alternating panels depicting landscapes and classical motifs; later the lower part was added with a series of coats of arms holding up a fringed canopy.

In the room below, as well as a marble fireplace of 16th century, you can see the door, now closed, which once gave access to the apartments of Pope Urban VIII.

The National Archaeological Museum in the palace has a collection of locally discovered artefacts including a famous mosaic showing the landscape of the Nile, and offers interesting information on the civilization of Latium from the 8th to the 4th century BC.

Continuing your tour of Palestrina

Also worthy of mention in Palestrina are several of the churches, including Palestrina Cathedral, built on an ancient square building. It was restored by Leo III in 898, who brought the body of the martyr Agapito here in the 3rd century. 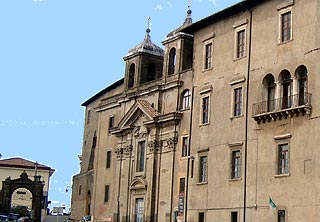 Transformed into a cathedral, it maintained its original form until the bishop Conone transformed it into a big church, added the two aisles and extended the central apse, where the sacred temple of the “Fortuna Primigenia” is located. One of the famous Roman mosaics (above) called "the Nile", was found in the sacred area here.

The Church of Santa Rosalia, built by Maffeo Barberini (1656-60) and designed by Francesco Contini, preserves four tombs of the Barberini in its rich interior, including those of Cardinal Antonio Barberini (1607-1671) and Taddeo Barberini, prefect of Rome (1704), with busts by Bernardino Cametti (1669-1736).

The church is dedicated to the Sicilian Saint for gratitude, because she preserved the Barberini family and the city from an epidemic of plague that raged in the Latium region between 1656 and 1657.

The architect Francesco Contini built the Baroque church, and Bernardino Cametti made the sculptures. As well as the graves of Taddeo Barberini and Cardinal Antonio Barberini there is also a special funeral chapel, where until 1938 the "Pieta" by Michelangelo was held.

The Prenestine Mountains outside the town are rich in vegetation, mainly olive, beech and oak trees. The region is a pleasure to explore and also gives you a chance to enjoy the local cuisine with its traditional recipes such as dumplings called "a coda de soreca", game (wild boar) and the typical biscuits called “Giglietti”.

Giglietti biscuits were invented by a French cook employed by the Barberini in the late 17th century, and the biscuits are celebrated each year in Palestrina with a “Giglietti Festival” which takes place the first week of August.

Map of Palestrina and places to visit

Places to visit near Palestrina 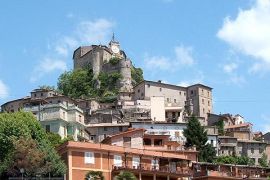 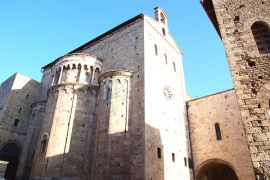 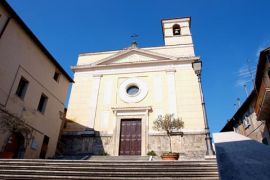 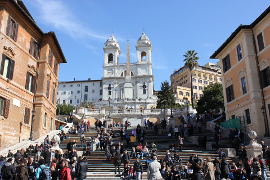 The capital of Italy, Rome is also one of our favourite cities in the world 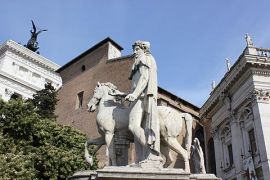 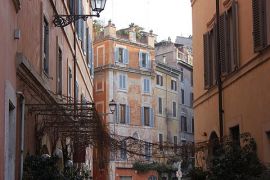