Italy This Way comment: despite varous changes and reconstructions to the cathedral over the centuries, the facade preserves its extraordinary baroque style facade and is in the centre of the lovely town of Noto so a visit is very recommended

Noto cathedral is in the Piazza Municipio, the main square in the centre of the town. It overlooks the square from its position at the top of a large flight of stairs. 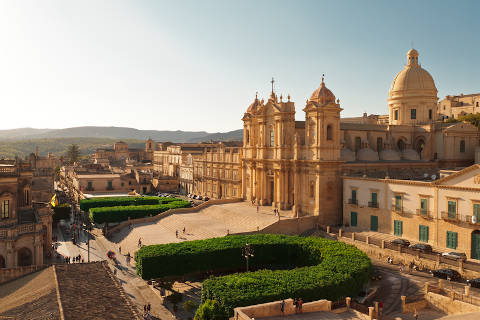 The cathedral in Noto was built, like many of the churches in south-east Sicily, as part of the reconstruction that took place after the earthquake that destroyed much of the region in 1693. The building took several decades to complete and was finally finished in 1776.

The facade is in the baroque style, although there are also neo-classical elements since that style had emerged by the time work on the cathedral was completed (the facade was one of the last parts to be completed), and is divided into two levels. The belltower is on the left and the clocktower on the right of the symmetrical facade.

The principal design elements of the facade include the corinthian columns (eight on the lower level and four on the upper level) and the four statues of saints that overlook the square. There are also pilasters and some decoration around the doors and the windows.

The dome of Noto cathedral collapsed two times during the 19th century and was rebuilt both times. Further important works of renovation were carried out in the 1950s although it is now thought these contributed to the later collapse.

The cathedral was weakened during an earthquake in 1990 and as a result the dome and several other parts of the cathedral collapsed in 1996 - large parts of the nave and the roof were lost during the collapse. Rebulding was completed in 2007.

As a result, the interior of the cathedral has little of historical interest and many of the walls remain white. Despite this the authorities have made substantial efforts with the interior, and the dome and surrounding walls have been covered with frescoes of biblical characters and there are stained glass windows in the eight windows around the dome.

Other new additions to Noto cathedral include the altar, lectern and crucifix, and you can also see several baroque elements that survivied the earthquake.

One very recent addition to the interior of Noto cathedral that we found very moving was two artwork, one of them a crucifix, made from fragments of a migrant boat that sank in the waters south of Sicily. We found this to be very thought provoking and an idea we would like to see in other towns in Europe. 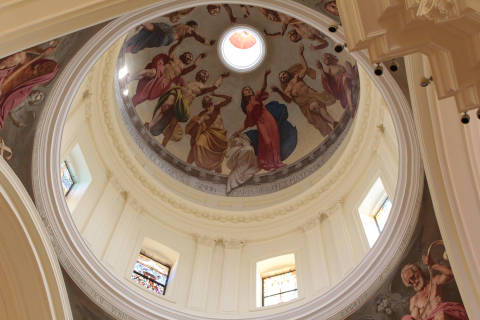 The town of Noto has many other interesting monuments: see Noto for details.