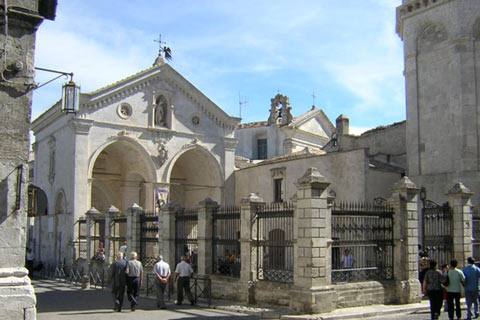 The town of Monte Sant'Angelo, with its attractive whitewashed houses running down the side of a hill and overlooking the Ardiatic Sea, is at an altitude of about 800 metres. It is known throughout the Christian world for its shrine dedicated to the Archangel Michael but also has other monuments and an interesting historic centre to explore. 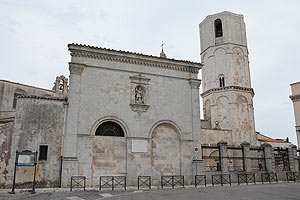 The sanctuary developed around a location where the Archangel San Michele appeared to the Bishop of Siponto on several occasions in 490 AD, which quickly made it a very popular pilgrimage destination, and the final destination on the pilgrimage route through Gargano.

This is the first shrine ever dedicated to Saint Michael in Western Europe. After this the famous Mont Saint Michel in France and Saint Michael's Mount in Cornwall followed.

Apparently the world was expected to end in the year 1000 AD, so Emperor Otto III came here in 999 AD to pray that the world could continue. His prayers were answered and the apocalypse failed to show up - thus reinforcing the sanctity of the site.

The atrium is surrounded by a colonnade and has an imposing octagonal tower to the right, built by Frederick II of Swabia (1194-1250) as a watchtower (or possibly as a baptistry), then transformed into a bell tower by Charles I of Anjou in the 13th century. The atrium leads to more stairs that guide you to the Romanesque portal called 'Porta del Toro' and dating back to the 7th century.

The bronze doors were donated by Pantaleone III (‘Pantaleone de Comite Maurone’, 11th century), an Imperial noble of Amalfi, who brought them from Constantinople. The doors are divided into panels depicting episodes relating to St. Michael from the Old and New Testament, while the nave is in gothic style.

Next you reach the Chapter Choir and the Chapel of the Relics, including the venerated Cross of Frederick II of Swabia. This 13th century cross is in silver filigree and holds a relic of the Cross. The altar, dating back to the 12th century, is dedicated to St. Francis of Assisi (c.1182 - 1226) who visited the Basilica in 1216.

On the right side of the aisle there is the sacred cave where the Archangel made his appearances, with the statue of the Archangel by Jacopo Sansovino dating from the first decade of the 16th century.

The Sanctuary of San Michele together with the sacred cave is a UNESCO World Heritage Site as one of seven groups of buildings in Italy that reflect the achievements of the Lombards influence in Medieval European Christianity. 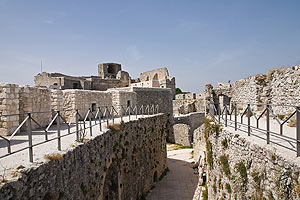 Not far from the Basilica and at the top of the hil above the town is the Castle of Monte Sant'Angelo, the other highlight of your visit. The oldest part of the castle is particularly powerful - this is the so-called Tower of the Giants, 18 meters high and with a pentagonal shape. The first evidence of the fortress dates back to Orso I, Bishop of Benevento in the late 10th century. With the advent of the Normans, the castle became the residence of the Princes.

The fortress had a great strategic military importance under  Frederick II of Swabia, then after the death of the Emperor, it passed to his son Manfredi (1232-1266), and then to King Conrad [Conradin] of Swabia (1252-1268). The Angevin made it a prison. It then passed to the Princes of Durres and then to the Aragonese.

Towards the middle of the 16th century the fortress belonged to the Grimaldi, who held it until the end of the 18th century when Ferdinand IV of Bourbon (1751-1825) gave it to Cardinal Fabrizio Ruffo (1744-1827). 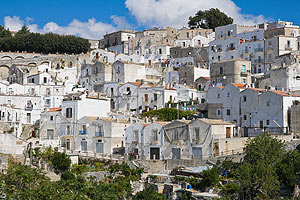 As well as the 'important' monuments you will want to spend some time in Monte Sant'Angelo simply exploring the streets of the historic centre, visiting a few of the the churches it contains, and enjoying the views from the viewpoint near the castle. Among the most interesting churches are:

Church of Saint Peter: A few meters from the Basilica you can see the façade of the Church of Saint Peter, dominated by a pierced canopy depicting four intertwined sirens. Inside is the baptistry of San Giovanni, known as the “Tomb of Rotari” (606-652) and surmounted by a large dome-shaped monument.

Note: the name 'in tumba' ("tumba" = "grave") is a mistake, because this is a monument which the successors of Rotari built in his honor. For this reason, we should really say the "dome" ("Tholus”) of  Rotari and not the “Grave of Rotari”...

The building is divided into three levels. The first floor is octagonal, and the second elliptical, with a high tambour then topped by the dome. The bas-reliefs above the entrance depicting "The capture of Jesus," "The Deposition", the "Marys at the tomb" and  the "Ascension" are of artistic value.

Church of Santa Maria Maggiore: To the right of the so-called "Tomb of Rotari" and to the south of the sanctaury complex there is a hall that leads into the Church of Santa Maria Maggiore. The church is attributed to Leo (11th century), the Archbishop of Siponto, although during the regency of Constance of Hauteville (1154-1198) the church was reconstructed in the Swabian-Roman shape.

The church façade has blind arches on slender pilasters surmounted by carved cornice brackets, while the portal canopy rests on two eagles and is adorned with carved lintels and cornices. The lunette of the portal represents the "Madonna and Child" while the interior has three naves and some frescoes of the Byzantine school.

In part even the local cuisine refers symbolically to the cult of Saint Michael, for example with the famous "bread of the Mount”, a loaf of considerable size and weight (seven pounds); and the oil and cheese on which stands the "Caciocavallo.

Where is Monte Sant'Angelo?

You can find Monte Sant'Angelo north of Manfredonia in the Gargano peninsula region of Puglia (Apulia) in south-east Italy.

Map of Monte Sant'Angelo and places to visit

Places to visit near Monte Sant'Angelo 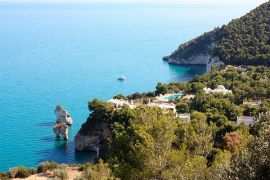 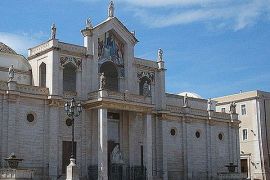 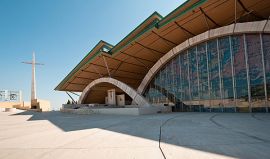 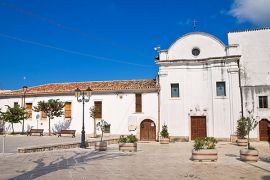