The Cape of Milazzo is the peninsula of land to the north of Milazzo, in the corner of north-east Sicily. It is an area of significant natural beauty that includes a popular natural highlight, the Pool of Venus.

Italy This Way comment: the walk around the Cape of Milazzo has some lovely coastal scenery and was one of our favourite walks on the Sicilian coast, hence why we include it here...

To reach the start of the walk around the Cape of Milazzo is not complicated: just start driving north from Milazzo (on the SP72 then the SP74) and keep going until the road stops! There is a car park and two restaurants at the end of the road.

It is possible to walk straight to the end of the peninsula to see the Piscine of Venus, and return by the same route. This is quick and easy but is not the path we would recommend, because it misses a substantial amount of the coastal scenery.

From the car park, if you walk a few hundred metres south you see a path to the right, that follows the coast (you can see the path from the car park but you can't reach it directly). Take this path.

Although it quickly changes from a concrete path to a natural path, it is never difficult or challenging unless you have walking difficulties, and trainers can be worn. There are some steps to descend (and come back up again!) when you get near the Pool of Venus.

From here it is very straightforward, because you are following the coast. There are cactuses and numerous flowers between the path and the sea, and the coast is rocky, so it is a very picturesque path. Eventually the path turns slightly inland just before the tip of the cape, but quickly rejoins the coast.

Near the end of the cape there is an attractive natural landmark called the Pool of Venus. This is a small natural cove, perhaps 20 metres across, surrounded by rocks.

If you want to visit the Pool of Venus in tranquility you will need to get here early or out of season, because it is very busy during the summer. Taking photos is not easy when there are people in the water and all over the rocks! Although it is fun to go in the water, because of the boulders it is not a very easy place to spend time sunbathing.

From the Pool of Venus the path you can follow the path straight back to the car park. This section of the path, along the north-east coast of the Cape of Milazzo, has clifftop views along the coast and across the Tyrrhenian sea to the Aeolian islands, before passing through a lovely olive grove.

We had expected the restaurants here to be very overpriced, because of the location and 'captive audience'. In fact they both had drinks and snack lunches at reasonable prices, useful since there are limited outher choices and you won't want to drive into Milazzo unless you need to.

An attraction of historic interest near the Cape of Milazzo is the large castle on a hilltop just north of Milazzo town: see Milazzo castle. After visiting the castle you can stroll around the Spanish Quarter of the town with a few rows of colourful houses next to the castle

Most people who visit Milazzo are going to the ferry terminal to travel to the Aeolian Islands.

Map of Milazzo cape and places to visit

Places to visit near Milazzo cape 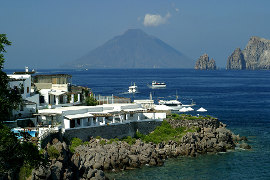 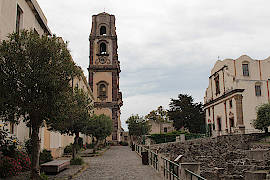 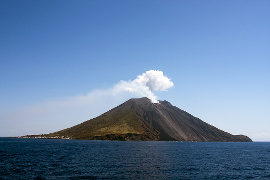 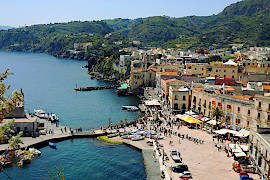 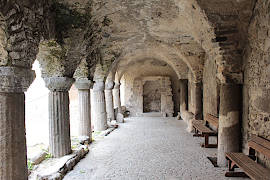 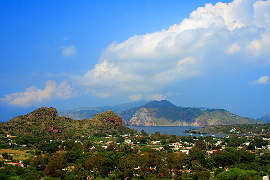