Lecce is one of the highlights of Southern Italy. It is found in the 'heel' of Italy and is a flamboyant city packed with wonderful Baroque architecture. It is one of the main tourist destinations of the Puglia region.

Lecce is full of palaces and churches many of which are covered in carvings in typical Baroque style.  The soft local stone made adoption of this style easy as it is perfect for carving. Indeed it is one of Lecce's main exports along with olive oil and wine from the olive groves and vineyards surrounding the city.

Prosperity in the 17th century led to the building of many churches and palaces and mansions most of which were in the ornate Baroque style. However Lecce has existed since Roman times and there are also some notable Roman monuments in the town.

The key monuments can be found in Lecce's historic old town and exploring is a pleasure as pretty streets packed with great shops, bars and restaurants wind between the main monuments.

Things to see in Lecce

At the heart of the historic city is the Piazza Duomo, a beautiful square surrounded by some of Lecce's most important buildings.

The 17th century Palazzo Vescovile (Bishop's Palace) is a beautiful building whose facade includes arches, stone balconies, statues and carvings. Next to it the Duomo (cathedral) was built by Giuseppe Zimbalo. It has two main entrances, a restrained, elegant entrance on the north side and a magnificent Baroque entrance from the square. 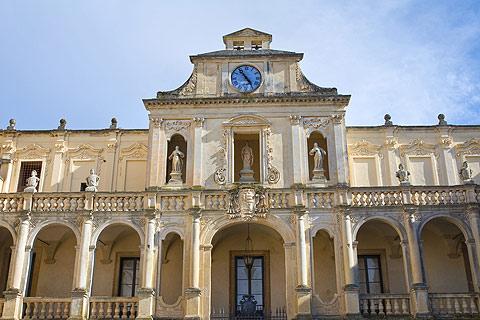 Dominating the square is the five-storey, 70m bell-tower with its octaganol loggia.

Also in the square is the Palazzo del Seminario (Seminary) which once provided eunuchs to the Vatican choir. 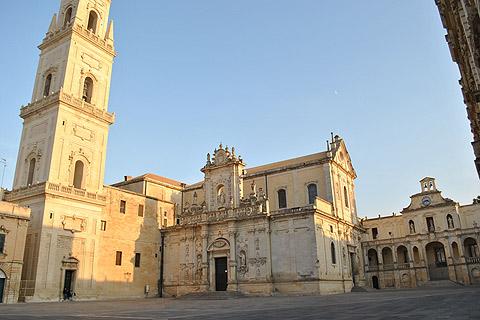 Lecce's other main sight is the Santa Croce church, the church of the Holy Cross. This was built over several centuries. It is the most decorated of all the highly decorated Baroque buildings of Lecce and its facade includes animals, monsters, vegetables and a large rose window. 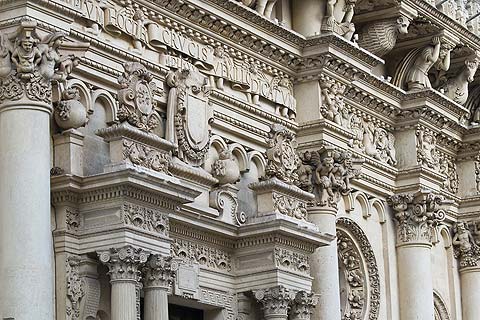 Nearby is the Piazzo Sant' Oronzo, a square with an unusual mix of styles. A Roman Amphitheatre (one of two in Lecce) sits on one corner of the square and is used for open-air concerts in the summer. Next to this is the tall St Oronzo column with a bronze statue of St Oronzo on the top.

Behind the Piazza Sant'Oronzo is the Castle of Charles V -  a 12th century building which was added to in the 16th century by Charles V and has an unusual trapezoidal plan. Legend has it that a white bear was kept in its moat by the 14th century owners, both as a status symbol and to scare off potential intruders.

The Torro del Parco (Park Tower) is one of Lecce's medieval buildings. It was built in the 15th century and is 23 meters high. It is surrounded by a ditch where bears were reared.

At the opposite end of the old town is the Porta Rudiae, a city gate built in the 18th century, again in a rather ornate style and topped by a stutue of Saint Oronzo. Another gate into the city is the Arco di Trionfo (Triumphal Arch) built in the 16th century.

Lecce was shortlisted to be European City of Culture 2019 though Matera in the neighbouring region of Basilicata was chosen.

Lecce is just a few kilometers away from both the Adriatic coast, with its beautiful white cliffs, and the Ionian coast. Otranto on the Adriatic side is a particularly nice seaside town.

Gallipoli on the Ionian sea has a number of interesting buildings.

Map of Lecce and places to visit

Places to visit near Lecce 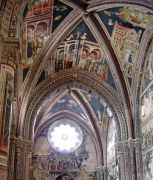 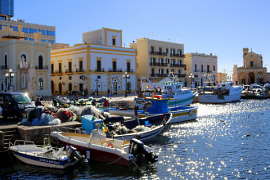 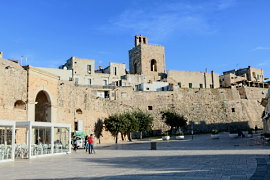 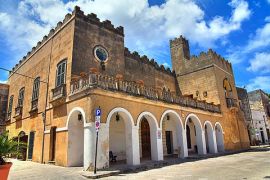 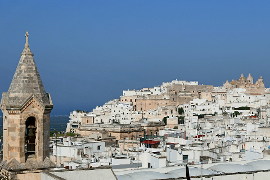