Mount Etna is one of just a handful of active volcanoes in Europe. Three of these are in Italy with two in Sicily!  Stromboli on the Sicilian island of Stromboli and Mount Vesuvius near Naples are the other two.

Mount Etna is on the eastern side of Sicily inland of Taormina. It is a UNESCO World Heritage Site. Mount Etna is also known as Mungibeddu in Sicilian and Mongibello or Montibello in Italian (meaning beautiful mountain). Today Mongibello is usually the name given to the two central craters and those on the north-east and south-east of the cone.

The dramatic vista of Mount Etna with its classical cone shaped volcano dominates views from far around. Many pictures of cities such as Taormina and Catania on the east of Sicily are taken with the slopes of Mount Etna visible behind. Although it is an active volcano, winter pictures often show its tall cone covered in snow.

Mount Etna is over 3000 meters high though its exact height varies with erruptions. Mount Etna is one of the worlds most active volcanoes and current eruptions (December 2018) are leading to earthquakes and ash clouds over Sicily and Malta. 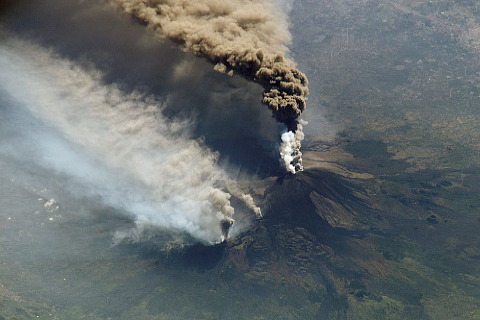 As Mount Etna erupts frequently there are a number of craters and surrounding these are the slopes of black larva giving the scenery a strange lunar look. Further down the slopes there are lots of vineyards and orchards as the volcanic soil is extremely fertile.

Mount Etna is one of Sicily's biggest tourist attractions and thousands of visitors come every year. The easiest way to visit is to take one of the guided tours that can be organised at Catania or Taormina. These vary depending on what you choose but often four by four vehicles will take you to the volcano where you can take a cable car up near the summit or you can treck to one of the non-active craters.

Visits often include The Valle del Bove (Ox Valley) which is a large depression in the eastern side of the volcano caused by a huge landslide after an eruption thousands of years ago. This landslide caused a huge tsunami at the time.

Alternatively you can do the trip yourself by driving to the Rifugio Sapienza, a hostel, and from here riding the cable car. The Rifugio Sapienza is a popular base for summer hikes and cable car rides and also for skiing on the slopes of Mount Etna in the winter.

Cyclists will be interested to note that the Rifugio was the finish of Stage 9 of the Giro d'Italia cycle race in 2011 and of Stage 4 in 2017. 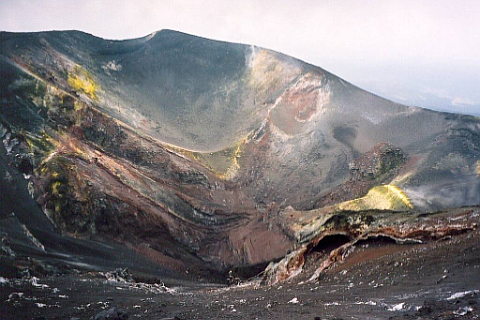 Footage of the 2002-2003 eruptions has been incorporated into the Star Wars film, 'Star Wars Episode III - Revenge of the Sith'. The eruption is part of the landscape of the planet 'Mustafar' in the film.

Another way to see the volcano is to take the train on the narrow-gage Round-Etna which travels round the base of Etna from Catania to Riposta.

The chances are if you are visiting Mount Etna you are staying at the beautiful coastal town of Taormina. If not be sure to visit.  On the way between Taormina and Etna you could visit the hilltown of Castiglione-di-Sicilia which has been classified as one of the most beautiful villages/towns in Italy.

Map of Mount Etna and places to visit

Places to visit near Mount Etna 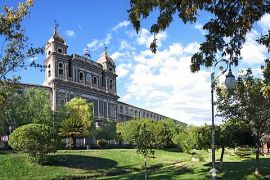 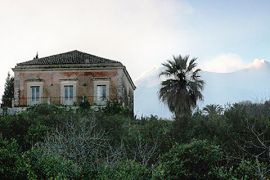 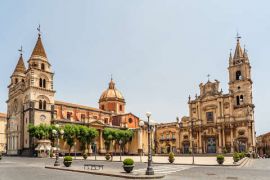 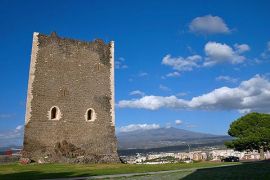 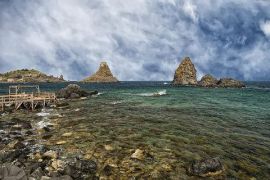