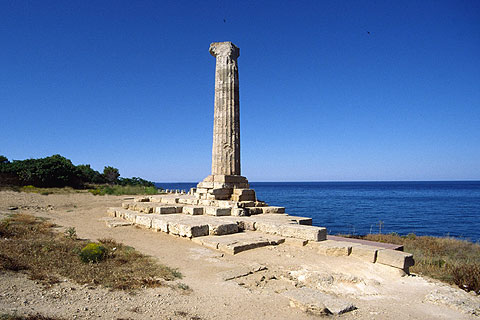 The Old Town of Kroton

The old town of Crotone is situated on a hill, where the ancient acropolis once stood, surrounded by walls built in the mid-16th century by Don Pedro de Toledo (1484-1553), who undertook the works of fortification with the rebuilding of the city walls and part of the castle. The new walls are in polygonal form, consist of five bastions and two ramparts on the sides of the castle and creating a very admirable example of a fortress.

You can see monuments and buildings with different architectural styles, ranging from the Middle Ages to the Renaissance, and ending with the Baroque.

The archaeological excavations have demonstrated the vastness of the ancient city, which stretched over hundreds of hectares. The city, from the Middle Ages onwards, as evidenced by the presence of many baronial palaces, was the place of residence of the feudal lords of all the “Marchesato” [=Marquisate]. The castle of Charles V (1500-1558) dominates the Acropolis, and like all medieval castles was equipped with a drawbridge.

The old town with its palaces and churches of art, extends inward starting from the Castle of Charles V.

The structure of the Cathedral has its origins in the ninth century, but the complete construction took place only in the 16th century. The facade is of Neoclassical style with three naves. Inside you will find the chapel of the Epiphany of the 19th century, richly decorated with stuccoes and paintings, a painting on wood in the Byzantine style depicting a black Madonna of Capocolonna.

Also worthy of note is the wooden choir dating back to the end of the 17th century, and other paintings of the 18th century by the local painter Nicola Lapiccola, depicting "Jesus returning from a visit to the doctors and the Madonna", from 1767.

Nicola Lapiccola (1730-1790) was a painter born in Crotone, and a pupil of Francesco Mancini (1678-1758). Particularly sensitive to the new Neoclassical style he was especially active in Rome (11).

Church of the Immaculate Conception and the Convent of Santa Chiara

Anothr religious monument if particular interest in Crotone is the church of the Immaculate Conception, with its neoclassical façade rebuilt in the 17th century on the site of a temple dating from the 15th century.

Inside there are Baroque stuccoes and various paintings of the 19th century, as well as a wooden crucifix of excellent workmanship that takes inspiration from the great Italian and foreign models of the 17th century. The church has a nave and is decorated with a portal with friezes of the Baroque period.

Not far from the church of the Immaculate Conception is the church and convent of Santa Chiara, which has a Neapolitan majolica flooring in the interior. We should also mention some works by D. Basile, an interesting painter of the 18th century active in many cities of Calabria including Crotone (12).

In the historical center of Croton is the palace that belonged to the Galluccio family, in the Neoclassical style. Nearby is the National Archaeological Museum, which contains the archaeological remains found in different excavation areas of the province and a few steps away, inside the Castle of Charles V, is the Town Museum which exhibits medieval finds including a significant collection of typical weapons such as crossbows, swords, and daggers.

Inside the Archaeological Park is the Antiquarium, which exhibits finds dating back to the Iron Age and the Bronze Age, as well as pieces of underwater archaeology found in the stretch of sea off Crotone and the promontory of Capo Colonna.

The Archaeological Park contains an enormous amount of architectural artifacts and evidence related to the great Sanctuary of Hera Lacinia. Building B was probably the first place of worship of the sacred area, where the "treasure of Hera” was found and made up of votive offerings, now on display at the archaeological museum of Crotone.

The visit to the archaeological area of Cape Lacinius can start from the wall of the temenos, the sacred space built in “opus reticulatum” [style of brickwork used by the Romans] and continued until the Doric temple (building A) with a single surviving column. Temple B is close to the sacred area, with rooms called "hestiatorion."

According to studies by R. Belli Pasqua the “hestiatorion” [area used during the banquets] is inside the area of the sanctuary and immediately behind the “Via Sacra” [=Sacred Way]. The walls, made of “opus quadratum” [=squared blocks], are preserved only at the base, while the courtyard is a rectangle, partially preserved, consisting of irregular blocks that has been interpreted as the stylobate [=the bases on which columns are supported] of the peristyle [=columned porch]. It has been assumed that there were 4 columns on the short side and 5 on the long side.

One question regards the number of participants at these banquets, and their possible identification. It is possible they were only the privileged classes, because Kroton had a politic organization of an oligarchic type, supported by the presence of Pythagoras and his followers until the middle of the 5th century, when the city faced a period of internal conflict, which resulted in the adoption of a more democratic dimension (13).

The background to the historical and artistic treasures of the illustrious past of Crotone have as a background a landscape virtually intact, filled with orange, pomegranate, mimosa and tamarisk. This natural environment fascinated F. Lenormant more than 100 years ago when he praised the healthiness of the sea air of Kroton:

“Safety was indeed the reason for which Myscellos opted in establishing a colony in Kroton. The ancient writers are unanimous in praising the clean air of this city and the advantages of its climate …(14)

Map of Crotone and places to visit