Cividale del Friuli is east of Udine, in the east of the Friuli region on the River Natisone and close to the frontier with Slovenia. The town has a long and interesting history, dating from its foundation by Julius Caesar, and was also an important regional town from the 6th to the 11th centuries.

Nowadays it is a quiet town, and Cividale is a pleasant place to visit and also listed as an Orange flag town.

The historical part of Cividale del Friuli based around the bridge - the Ponte del Diavolo (Devils Bridge) - and Piazza del Duomo is the most interesting for visitors.

A visit can start at Cividale Cathedral. The current building is the result of a combination of the Venetian Gothic and Renaissance styles. Inside you can see a silver painting of Patriarch Pellegrino II (died 1204), a masterpiece of medieval goldsmith work; a painting by Palma il Giovane (1544-1628); and a wooden crucifix of the 13th century. 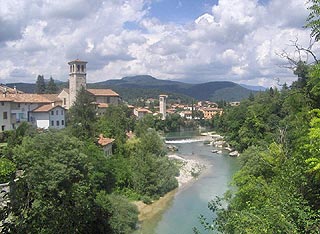 Built in the 16th century on the ruins of an old religious building, it has an external portal by Jacopo Veneziano (15th century), and inside an "Annunciation" by Giovanni da Udine (1487-1564).

From here you can enter the Christian Museum which contains two items of great importance:

Altar of Ratchis: The 8th century stone Altar of Ratchis is the most important artefact in the museum. It is decorated with stone carvings of religious figures with a particularly evocative power, carved in the Lombard period from a single block of Istrian stone.

In the front plate Christ on his throne is flanked by two Cherubim, within an almond supported by four Angels. The two side plates show the visitation by the Virgin and St. Elizabeth, and the adoration of the Magi.

On the rear plate, decorated with geometric patterns, is a window corresponding to the opening of the reliquary. On top of the front wall and the other three slabs that form the altar is aninscription which confirms the altar was made in 737- 744.

Baptistery of Callixtus: The other great monument preserved in the Christian Museum is the baptistery of Callixtus, with an octagonal form with seven original arches sustained by eight columns. Note especially the decoration of the small arches with carved vine shoots, tangles of wicker and symbolic animals. The capitals are decorated with acanthus leaves, probably dating from the 5th and 6th centuries. 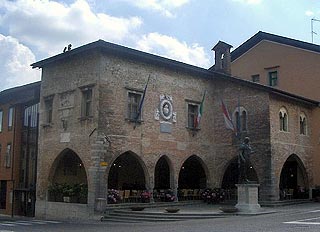 Above the arches there's a dedicatory inscription that confirm the time of construction of the small arches as 737-756.

On one side of the octagonal Baptistery parapet is the so-called “pluteus of Sigualdo”, dedicated to the Patriarch Sigualdo, successor of Callixtus (756-786). You can also see the symbols of the four Evangelists.

The Tempietto Longobardo (Small Lombard Temple) in Cividale del Friuli is one of the most complex buildings and original architectural works of the Lombard age.

The rich decorations (mosaics on the ceiling, stucco and ornamental figurativework and fine frescoes) make it a work of great historical and artistic value, created for the royal couple Astolfo (749-756) and Giseltrude.

In the entrance wall you can (only partially) admire the original decoration of the Temple. The six female statues depicted with remarkable realism were considered by critics to be figures of Saints.

According to some suggestions these include the martyrs Chiona Agape, Irene, and Sofia. Their identification, however, is anything but certain. Experts believe these date from the mid 8th century.

Near the cathedral is the impressive Devil's Bridge, originally built in the 15th century although destroyed and rebuilt after the First World War, and the Celtic Hypogeum, an underground environment dug into the rock which was probably a Celtic burial chamber and provides an insight into life here thousands of years ago.

You can then continue your tour of Cividale del Friuli by ambling along the peaceful streets, admiring grand palaces and small courtyards, before returning to Piazza del Duomo and perhaps learning more of the Roman history of the town in the archaeological museum in the Praetorian Palace.

The design of the building of the Praetorian Palace itself is attributed to Andrea Palladio and was built in the late 16th century. Currently the Museum exhibits are over two floors. 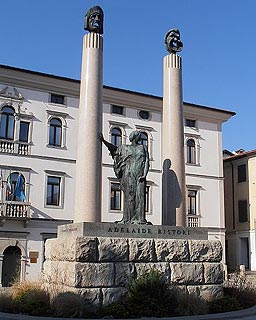 The ground floor holds the lapidary material, divided into Roman, Byzantine and early medieval sections. The rooms of the south wing of the ground floor contain fragments of tabernacles, columns, parapets, capitals, pilasters and cornices from the 6th to the 9th centuries.

These have themes that refer to the moral symbolism of the famous Medieval "Bestiaries", where the characters were just animals, but with human characteristics and with the same advantages and defects of men.

In the courtyard of the palace Jewish gravestones and coats of arms from various periods are exhibited.

The first floor of the Palace holds the Lombard exhibition. The material is arranged chronologically, showing the artefacts of the first Lombard settlement in "Forum Julii", found in the ancient necropolis of St. John and “Cella” (VI-VII century).

Of particular historical value is the room that holds a Roman sarcophagus and the outfit of Duke Gisulf.

Places to visit near Cividale

Along the “Natisone” river and its tributaries meander valleys with an unspoiled natural environment (mostly deciduous woods, meadows and small farms) and containing the characteristic mountain refuges, parks and small towns that are rich in traditions of history and folklore.

A few kilometres from Cividale del Friuli the Castelmonte Sanctuary is a highly recommended excursion.

Map of Cividale del Friuli and places to visit 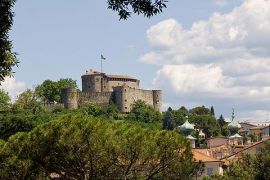 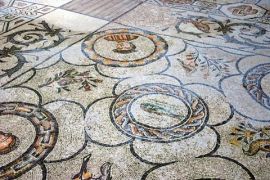 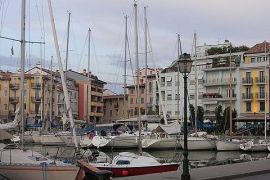