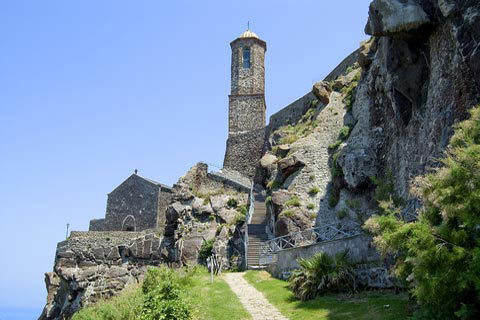 The Sardinian village of Castelsardo retains its ancient medieval layout, with the ramparts still surrounding the oldest part of Castelsardo - known as Pianedda this part of the town is an ancient fishing village.

The town is on and around a large rocky promontory that juts into the Mediterranean Sea. Although there is rather too much modern development on the slopes below ancient Castelsardo, the historic centre is rewarding to visit and pedestrianised.

Start your visit to Castelsardo perhaps with the castle at the top of the hill, then head down towards the port area, coast and beaches...as the day gets warmer!

The stronghold that stands on top of the hill is reached by climbing up towards the ancient walls and along the alleys and narrow steps until you reach the ancient village of "Anglona", located around the Doria castle which was built at the highest point of the rocky hillside. 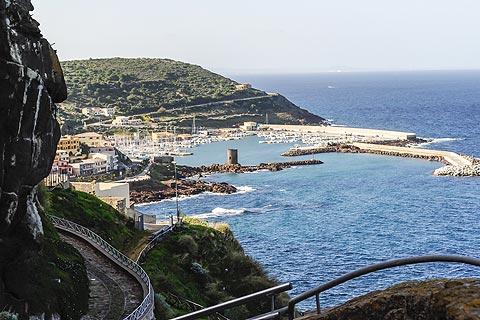 Among the fortified points on the ramparts, on the north side is the “Manganello Bastions", to the east are the “Bellavista Bastions” and those to the south-east are called the “Loggetta”.

Originally there was also access from the sea, called Lu Grannaddu* and from where a steep stairway between the walls allowed the climb towards the city.

* In the 15th century this was called "Mandracho del socorro” (in Spanish), because it enabled supplies from Genoa to be brought to the village during sieges.

Today the castle is the seat of the Museo dell’Intreccio (Museum of Interlacement). The art of 'interlacing' is very ancient in Sardinia and was probably linked to the need to use flat and flexible vegetable material to build vessels.

The Museum is housed in the halls of the medieval fortifications of Doria castle and displays manufactured articles of different shapes. Each room has its own theme, which ranges from the bakery to agricultural activities, from home life to fishing and touching every moment of life, including tableware and articles with a magical or religious function. 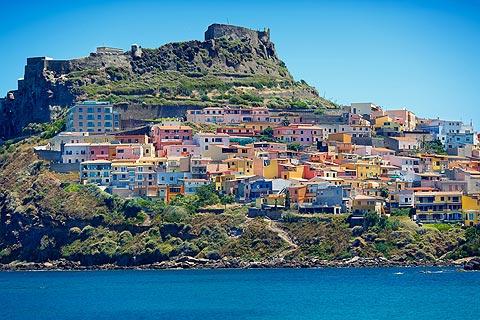 Other historic highlights in Castelsardo

Although the fortifications are the most significant historical remains in the town there are also some important religious buildings to explore. Among these is the Parish Church of San Antonio Abate.

This church is famous because it contains four paintings that are part of a polyptych by an unknown Master, called the "Master of Castelsardo", who worked in the city between the late 15th and early 16th century, and by whom we can see a "Madonna and Child". According to experts, the paintings are the work of an artist of Spanish origin.

The square called the Piazza Santa Maria is bounded to the south by embankments and to the north by the former Monastery of San Martino which is an annex of the Church of Santa Maria delle Grazie. The church has been the subject of a recent restoration, and does not present a real façade onto the square but rather a series of extensive limestone arches.

Inside it is clear that the church has suffered several transformations over the centuries, although its irregular geometry can also be explained by the nature of the terrain. In one of the chapels of the Church there is a 14th century crucifix known by the inhabitants of Castelsardo as 'Lu Cristu Nieddu'.

The Church of Santa Maria was a holy place where one of the most important acts of civic life was once carried out - the swearing in of new magistrates when they were elected to rule the municipality.

Today the Church is the seat of various confraternities and also the place from which the "Lunnisanti" ('All Saints') procession, which is celebrated on the Monday before Easter, starts and ends.

The centre of Castelsardo has lots of narrow alleys for you to explore, and where you will also find numerous restaurants and small shops. 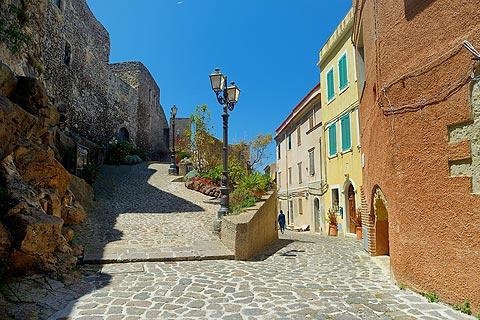 The coast around Castelsardo

At the bottom of the hill, below the more recent additions to Castelsardo, there is a small beach and then a marina a short distance along the coast. You can find other beaches a short distance outside the town.

The coast around Castelsardo has some interesting natural phenomena. Among these, wind erosion has created some curious forms such as the "rock of the elephant", a large reddish boulder that, due to erosion by the weather, now has a shape that looks like an elephant.

At the base of its right side there are some "domus de janas", the artificial caves carved by the Sardinian in the Neolithic period (6000-3000 BC). Inside the caves a symbol representing the taurine horns can be seen.

The region is also characterized by its rich volcanic coastlines. A few kilometers from Castelsardo there are hyper-thermal waters (temperature above 40° c) with salt-bromine-iodic waters which are used for baths and mud for the treatment of arthritis and neuralgias.

Places to visit near Castelsardo

An interesting “Nuraghe” (a traditional ancient Sardinian monument) is the so-called "Paddaggiu", which is perfectly preserved and along the road to Valledoria. Along the road towards Sedini there are some remains from the Roman period.

Finally, in a valley a few kilometres inland from Castelsardo and the sea you can see the Church of Tergu, built at the beginning of the 11th century. Until the late-medieval period this was the most important Benedictine Abbey on Sardinia.

Leisure and eating out

In between exploring the cliffs and the sandy beaches, or perhaps after a walk in the pine forest surrounded by sand dunes of the estuary of the River Coghinas, there are plenty of opportunities to enjoy the local cuisine.

Specialities in Castelsardo include 'Castellanese lobster' and 'sea bass vernaccia’, also fish soup, and a variety of fresh salads and squid dishes. The typical Sardinian cuisine is best represented by ‘Castellanese gnocchi', by the 'Currigioni' with sauce, or Ricotta ravioli. Typical sweets include the famous "Seadas" honey, to be enjoyed perhaps while sipping the Cannonau, Fermentino and Myrtle wines.

Map of Castelsardo and places to visit

Places to visit near Castelsardo 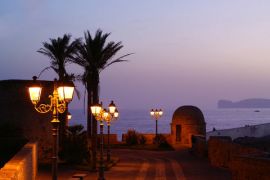