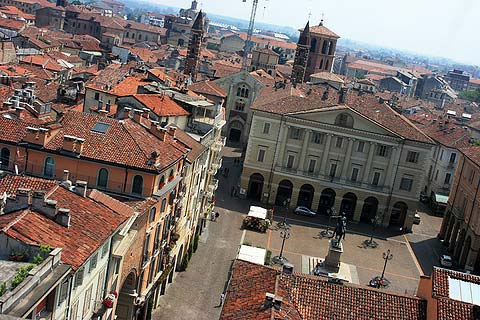 Casale Monferrato is a substantial town, located on the plain between the extreme eastern slopes of the hills of the Po and the right bank of the river, in the Piedmont region of north-east Italy.

Despite more recent development the historic area of Casale Monferrato has kept the perimeter that was established by the town's ancient fortified walls.

Although significantly restructured over the centuries the Old Town in Casale Monferrato is very interesting because of the many palazzos built by the noble and bourgeois families who rebuilt or adapted the buildings, and also built new churches.

The town contains a great deal of interest to visitors so allow plenty of time for your visit and for time to stroll around taking in the atmosphere and stopping in a cafe.

Tour of Casale Monferrato: From the Fortress to the "Krumiri".

Start your visit to Casale Monferrato at the great square castle on the Po River. The massive Fortress probably dates from 1000: it originally belonged to the Paleologi lords. The fortress has a quadrilateral plan with corner towers and is surrounded by a moat.

It is a remarkable example of 15th century military architecture,  especially the dungeons and towers including the so-called “Large Tower”. Coupled to the castle walls are the so-called “bertesche” (wooden turrets with loop-holes, located in the highest points of the castle to spy on the enemy and fight him under cover). The entire complex was originally defended by a moat around its perimeter. 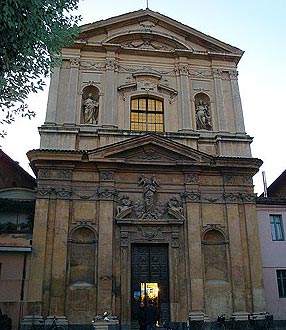 The cathedral is the most important religious building in Casale Monferrato, an example of Romanesque-Gothic architecture and rich in works of art. The 13th century cathedral façade has two bell towers either side of a brick and stone front and the interior has five aisles. The narthex (entrance), with its barrel and cross vaults, is enriched by a gallery with triple lancet windows.

Inside the cathedral you can see the Romanesque capitals, mosaics, and the crucifix in silver leaf suspended over the presbytery: the Christ is formed by a wooden support covered with lamina of silver and copper with the wooden cross decorated with precious stones and crystals of different colours, like a royal crown on his head.

The chapel of Saint Evasio (in the right aisle of the cathedral) is rich in a wide variety of marble and the work of B. Alfieri (18th century).

The Civic Museum in Casale Monferrato

Located in the old Monastery of Santa Croce, this building is decorated with frescoes by Guglielmo Caccia* in the cloisters  and contains valuable collections of paintings, ceramics and wooden sculptures.

* Known as  “Moncalvo”, Caccia (1568-1625) was a painter who played a significant role in the period of the Counter-Reformation

The Museum is divided into several sections, including the plaster casts Museum, with interesting works by Leonardo Bistolfi (1859-1933, an exponent of the Italian Symbolism), and the Art Gallery, containing works by Moncalvo, Carlo Musso (1907-1968, a Romantic painter particularly appreciated for his portraits), Pietro Francesco Guala (1698-1757, a Baroque painter, also a great portraitist) and other paintings dating from the 15th to the 20th century.

There is also a collection of paintings by Angelo Morbelli (1854-1919, a realist painter, who later joined the "Divisionism" movement, characterized by a strong social commitment) and an Archaeological section with some finds from the Bronze Age.

Among the other notable monuments in Casale Monferrato are the Jewish Synagogue, built in 1595 and with an impressive interior that testifies to the importance of this community.

There are also many Baroque palaces, including those of Saint George, the Town Hall, the Gozzani Palace of Treville, and the Ottolenghi and Mumico Palaces, and several other churches, some of which are quite imposing.

A walk in the old town also reveals glimpses of ancient courtyards that are equally fascinating in their own way.

Close to Casale Monferrato there are many other churches and monuments worth visiting, but before exploring we suggest you first find time to enjoy the local cuisine!

One local highlight is the famous "Krumiri" made in the town (cookies made of wheat flour, butter, eggs, and vanilla). Usually we enjoy them as a sweet after a meal, with coffee and tea, or even with a small glass of White Grappa.

Map of Casale Monferrato and places to visit

Places to visit near Casale Monferrato 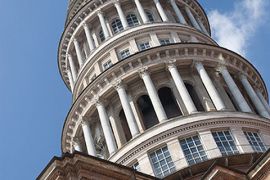 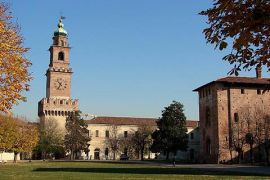 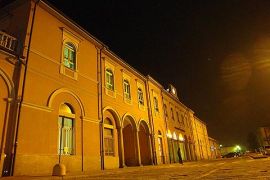 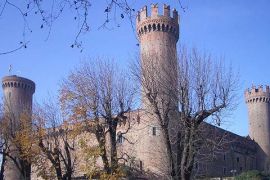