Carloforte itself is an attractive small town and there are several scenic highlights close by as well as easy access to small beaches and coastline which together ensure the resort is popular and quite active in summer.

Starting your visit from your ferry arrival point, Carloforte has a marble statue of King Carlo Emanuele III of Savoy that built in 1786 by the first generation of “Tabarkini” in gratitude to the founder of the town. Behind the monument a very short road leads to the Piazza della Repubblica, a very typical square with four “ficus” (fig) trees providing shade. 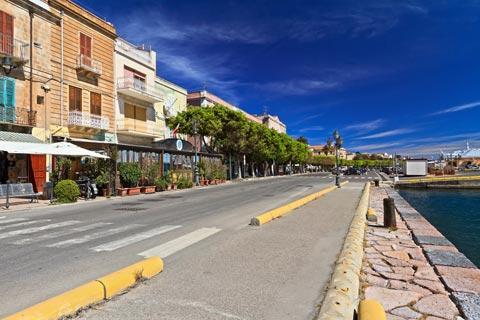 Crossing the square, another short road leads to the parish Church of San Carlo, one of the first buildings to be erected in Carloforte, immediately after the colonisation of the island. Built in 1775 in neoclassical style, the Church takes its appearance from the parish church of Pegli, from where the first inhabitants came (See also history of Carloforte).

Over the years the Church has been altered numerous times with the most recent being the construction of the bell tower in 1797.

The interior of the church is very bright and has a single nave with three chapels along one side. On the banisters that separate the presbytery from the nave you can see two 18th century marble lions.

On the left corner at the bottom of the nave, before the altar, is a statue in “papier-mâché” representing “Sant'Anna with our Lady little girl”, brought to Carloforte by settlers in 1738 when they moved from the islet of Tabarka to the island of San Pietro.

Continuing through Carloforte along the Via XX Settembre, parallel to the square and on the left, you can see another small temple, the Church of Our Lady of the Slave. The Church takes its name from a statue in Linden wood in the niche on the altar, found on the beach in Tunisia.

Returning to the seafront, at the end of the Avenue there is a staircase leading to the Castle and the ancient town walls. 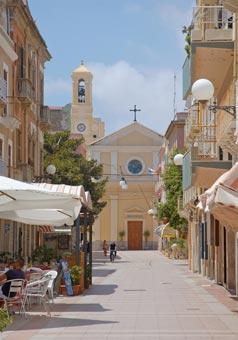 The entire defensive structure of Carloforte was started in 1806 under the Barbarian incursion and consisted of a long wall with seven forts, one of which still exists, the Santa Teresa’s Fort.

Highlights in this part of Carloforte include Saint Carlo’s Fort and the “Old Prisons”.

At the upper entrance of the village, Saint Carlo’s Fort is known as the "Castle". In 1738, it was built in a short time, maybe a month, because urgent shelter was needed for the men and arms involved in the defence of the community.

The building, still solid and robust, is situated on a rocky spur, and consists of two floors, seven rooms and a spacious inner courtyard. It was the first building in masonry that the “Tabarkini” realized - the surrounding buildings in wood were destroyed by fire in 1739.

The decision to erect the first blockhouse of the garrison and defences was taken in 1738, but construction only began in 1768, with local stone and blocks of trachyte. It was called the “Vittorio Tower” in honour of King Vittorio Amedeo III (1726-1796), King of Sardinia and had the aim of defending the southern area - it was the only Tower not used to protect the island from the French invasion in 1798, by which time the building was no longer used for this purpose.

After 1798 the inhabitants felt the need to defend the island, so in 1806 the construction of ramparts was begun around the town. In 1806 construction of the first Blockhouse began, near the promenade and called “Emanuele”, in honour of the King. The work continued for several years, due to the extensive size of the walls and the associated blockhouses and doors, which were closed at sunset and reopened at dawn.

By the time the work was completed the original goal was lost because the Barbarian incursions had became less frequent.

Among other religious buildings in Carloforte, we should mention the small Church of San Pietro or, more precisely, the church of the “Novelli Innocenti”, located in the southern part of the town, not far from the salterns. 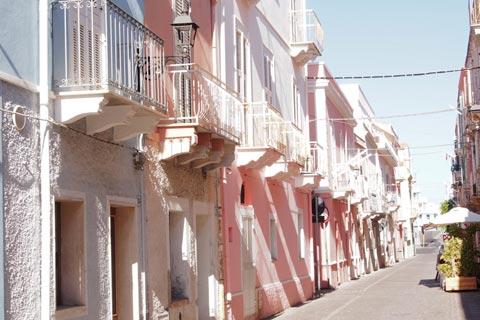 The Parish Church of Saint Pietro is a modern construction which is not yet completely finished in every detail, but is opened for worship. It is located between the Via Cavallera and Via Vincenzo Corvetto, with the main façade overlooking the Piazza dei Galanzieri.

According to tradition, the primitive 13th-century Church, of which the current version is a remodelling from 1796, was built by the will of Pope Gregory IX (1170-1241) between 1227 and 1241, to remember and embrace the remains of a number of children who perished in the wreck of two ships that was due to carry them to the Holy Land, during what was called the Children's crusade, in 1212.

The Carloforte Civic Museum is also worth visiting and divided into four sections:

The region surrounding Carloforte is really impressive, with a luxuriant and unusual character. The 20 kilometres of coastline of the island are mostly rocky, and in the western and northern areas there are some caves, harbours and natural pools with a few small beaches, both sandy and rocky.

Among the highlights along the coast are a natural bay which is very popular with divers, the views from the cliffs and some interesting rock formations, such as the stacks called 'Le Colonne' to the south of Carloforte. 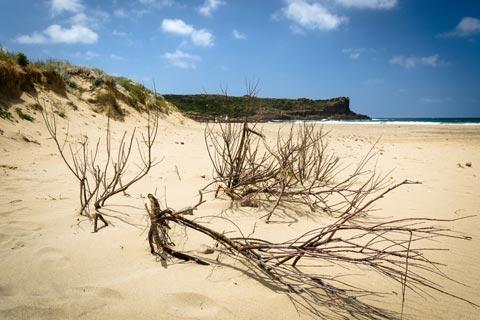 Off the north-east coast there are two very small islands called the “Ratti” and “Piana” islands. On the second you will find the old buildings of the most important tuna factory of Sardinia, now transformed into a residential and tourist village. The island has no streams or watercourses, but has many ponds and marshes.

The interior of the island is hilly with vegetation typical of the Mediterranean bush such as cistus, lentisks, strawberry-trees and junipers. The Aleppo Pine woods and Holm-Oak bushes are also to be seen as well as small vegetable gardens and vineyards.

Frequent ferries to the island arrive from the Sardinian port of Portvesme, and also from the port on the neighbouring island of Sant'Antioco.

Map of Carloforte and places to visit