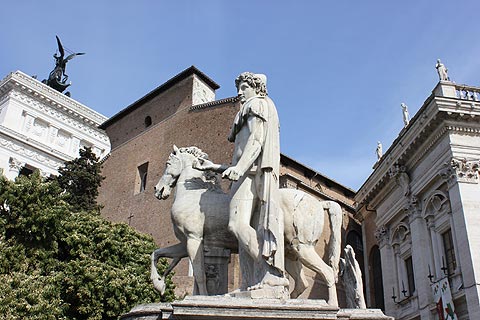 The Campidoglio district of Rome is the area on the Capitoline Hill, in the center of the city and just to the north-west of the extensive Roman Forum area.

Although small it is one of the most interesting, and most visited, areas of Rome and combines architecture from the renaissance period with the imposing 20th century Vittorio monument, while looking out across monuments covering the last 2000 years of the citiy's history.

A visit to Campidoglio should start from the central square (the Piazza del Campidoglio), one of the most impressive squares in Rome.

Climbing the long flight of steps to reach the square you pass between two large Roman statues of Castor and Pollux with their horses, creating one of the most imposing sights in the city.

The square itself was designed by Michelangelo in the 1530's and has renaissance period buildings on three sides: the Palazzo Nuovo is to the left, the Palazzo Senatorio straight ahead with its two imposing statues, and the Palazzo dei Conservatori is to the right. The palaces to the left and right are now the Capitoline Museum.

There is also a large statue of Marcus Aurelius on a horse in the centre of the square, a very beautiful church accessed from one corner (or up a separate steep flight of steps) and - just behind the church - the enormous monument to Vittorio Emanuelle that can be seen dominating the horizon from many places in Rome.

Campidoglio is also situated on one of the famous 'seven hills of Rome' so has impressive views in all directions.

Rarely has such a substantial monument received such a lot of criticism!

Vittorio Emanuelle II was responsible for the unification in Italy in 1861, and became the first King of the new country. After his death it was decided that a monument should be built as a tribute to his achievements - and the 'Vittorio Monument' is the result.

Like it or not - and it is a rather excessive statement and lacks the beauty of many of the more simple monuments nearby (such as the elegant Trajan's column) - you can't ignore it since it is visible from so many places in Rome.

In any case, it is free to explore the terraces of the monument and to look out across the rooftops of Rome (although there is a 7 euros charge to take the lift up to the very top for the best views) and well worth a visit - if nothing else, when you are on the monument you are in the one place in Rome where you can't see how enormous it is!

Church of Santa Maria in Aracoeli

The Church of Santa Maria in Aracoeli stands to one side of the Piazza, at the highest point on the Capitoline Hill and at the top of a long steep staircase on a site that was once occupied by the Temple of Juno, one of three large temples that stood on the hill (the others were the Temple of Jupiter and Temple of Minerva).

In the fourth century B.C., the irritated honking of the sacred geese around Juno's temple on Capitoline Hill warned the people of an impending night attack by the Gauls, who were secretly scaling the walls of the citadel (History of Money, Jack Weatherford)

Although a church stood here from the 6th century, the present church dates from the 12th century.

The relatively plain facade gives little clus to the ornate interior. The columns that line the nave were 'reclaimed' from Roman monuments, and there is a great deal of ornate decoration, in particular around the altar, in the chapels and on the ceiling.

You can also see frescoes by Pinturicchio and Cavallini and other works by Michelangelo and Donatello, among others.

In 1471 Pope Sixtus IV gave a collection of classical sculptures to the people of Rome. These formed the original collection of what is now the oldest public musum anywhere in the world.

The main focus of the museum is still classical statues, with a very extensive collection of interesting Roman artefacts - statues, busts, mosaics etc. There are also some bronze statues, including a very famous bronze statue of a wolf dating from the 5th century BC, and a good number of impressive renaissance paintings.