Buonconvento is a Tuscan town in the Crete Senesi region of Tuscany, about 30 kilometres south of Siena. The town is now a reasonable size, but the medieval quarter which is of interest to visitors is quite compact.

Although the historic part of Buonconvento is small, it is very pleasant to explore the traditional streets and buildings which retain an authentic medieval aspect. Many of the buildings are in red brick which enhances the overall appearance.

A medieval palazzo - the Palazzo Podestarile - is built in brick and with the insignia of ancient families of lords embedded in the facade and one of the most attractive buildings in Buonconvento. The attached tower is now also used as a clocktower. Several other imposing medieval houses can also be seen in this part of the town such as the Palazzo Borghesi, the Town Hall and the Palazzo del Glorione. 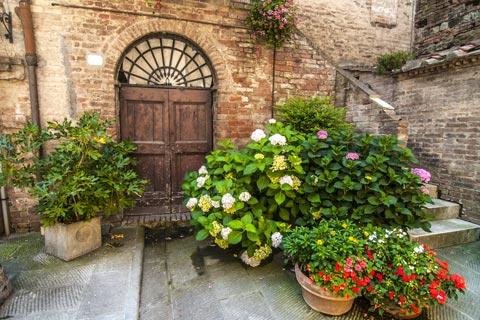 Buonconvento also retains a significant part of the original walls that once defended the town from invaders, and one of the tall gates that allowed access to the centre, called Porta Senese. The walls and gate were built towards the end of the 14th century.

There was originally a second gate at the other side of the town but this was destroyed by the Nazis during the Second World War.

Another notable highlight in the town is the Museum of Sacred Art which contains several impressive artworks including a painting by 15th century renaissance artist Matteo di Giovanni and another by Sano di Pietro.

Because of the various charming aspects to Buonconvento it is now officially classified as one of the 'most beautiful villages in Italy. Overall its is a very pleasant village to visit or to use as a base for exploring the Crete Senesi region.

Outside the village is the sturdy fortress called the Castello di Bibbiano, with high stone walls around a central building in brick.

While the landscapes of the Crete Senesi region, with their rolling hills, cypress trees and white clay gullies are the principal attraction for visitors to this part of Tuscany other highlights also include Asciano to the north and the Benedictine Monastery at Monte Oliveto Maggiore (between Buonconvento and Asciano in a very lovely setting and well known for the cloisters and frescoes.

Map of Buonconvento and places to visit

Places to visit near Buonconvento 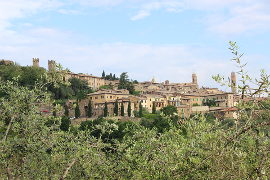 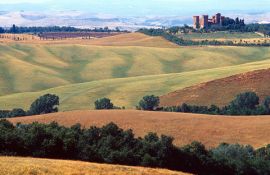 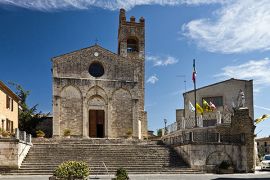 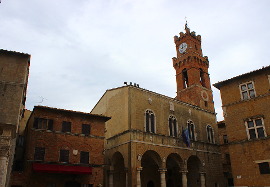 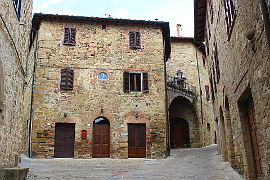 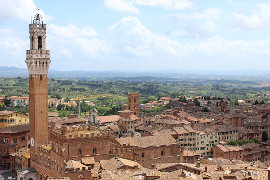