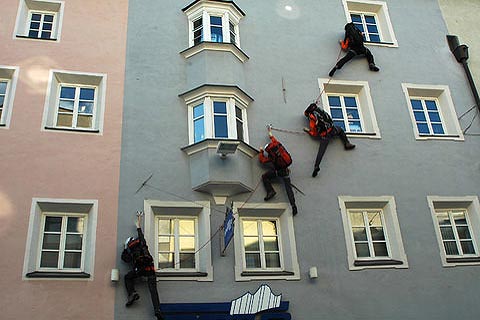 Bruneck (Brunico) is found to the north-east of the Tentino-Alto Adige region, to the north of the dolomites and in a valley overlooked by wooded slopes and the Kronplatz mountain and ski resort.

Dating originally from the 13th - 14th centuries, this pretty market town has an interesting old centre to explore, with narrow streets squeezzed between medieval houses, and a main street of colourfully painted houses, many with attractive balconies and hanging flower displays. 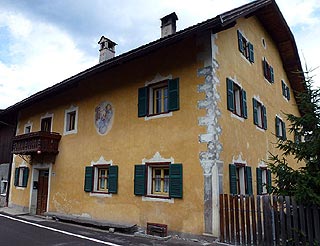 Stay alert as you wander around Bruneck, there are numerous small features such as statues in niches, ancient doorways etc that give Bruneck its individuality and character.

The Old Town is located around the picturesque “Monte del Castello” [“Mount of the Castle”], which once belonged to the Bishops of Brixen.

The road called Via Principale is rich in historic mansions, among them that of Michael Pacher (1430-1498), a famous South-Tyrolean painter and sculptor.

As well as simply exploring the streets of this quaint town it is well worth visiting the churches, of which there are several of interest.

The neo-Romanesque Parish Church is built on the foundations of three earlier churches that have preceded it over the centuries. Of the gothic church, whcih was destroyed by fire in 1850, the walls of the sanctuary remain standing, incorporated into the new construction.

The church frescoes by Georg Mader (1824-1881, an Austrian painter) depict the life of the Virgin Mary and are in the style known as the Nazarenes (note below). The altarpieces were painted by the Austrian painter Franz Hellweger (1812-1880) while the bronze relief known as 'Epitaph of Kempter' in the atrium of the church is attributed to Hans Reichle of Brixen (c.1570-1642).

'Christ carrying the cross assisted by the Cyrene' on the central pillar to the left is a 15th century wooden sculpture and the "Pieta" to the left of the altar is from the same period, while the crucifix above the baptismal font is probably a work by Michael Pacher, a native painter of this city.

The Nazarenes were a group of young and idealistic German painters in the early 19th century. They believed that art should be at the service of religious or moral intentions and wished to return to the spirit of the Middle Ages.

The core group was formed in 1809 when six students from the Academy of Vienna formed an association called the “Brotherhood of St. Luke” (“Lukasbrüder”), named by the patron saint of painting. The name “Nazarenes” [used for the first time around 1817] was attributed to them jokingly, for their devout lifestyle and flowing hair.

Church of the Holy Spirit

The Church of the Holy Spirit is in the baroque style. The church was founded by Cardinal Nicholas of Cusa (1401-1464) and dedicated to the Trinity. Situated in the valley and perched on a big rock, it was built in 1455 and enlarged in the 16th century.

Inside the church you can see the "Baptism of Christ" by Franz Unterberger (1707 - 1776). The church contains numerous sculptures and crucifixes, with the wooden statues of St. Oswald, Kilian and Ursula and the Crucifix worthy of particular interest.

Church and Convent of the Ursulines

Near the gate of the Ursulines, known as Porta di Sotto, is the Ursuline convent, built in 1741. The tower is decorated with various pictures and coats of arms, the most important of which is by the painter Hans von Bruneck. 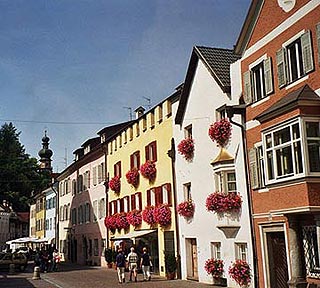 The Church of St. Catherine, situated on the same hill as the castle, dates back to 1345 with 17th century baroque elements.

Within the church is a tombstone in white marble by Leonhard Stuckh (14th century), and 18th century frescoes in the south portal depicting the saints Catherine, Sebastian and Wolfgang.

The two peaks were added after a great fire in 1723, and the bell of the church became the emblem of the city.

Also to be visited is the castle of Bruneck, surrounded by a massive wall with towers. The castle is still well preserved. The entrance, on the south side of the castle, was originally only accessible via a drawbridge and consists of a late Gothic portal, dated 1584. On the tower above are the coat of arms of Bishop Andreas von Österreich (1591-1600).

Another place meriting a visit is the Bruneck Civic Museum, which holds the collection of Michael and Friedrich Pacher, with graphic works of the region by modern and contemporary artists and a section devoted to "graphics and literature". On the ground floor is the permanent exhibition of late Gothic works by Michael Pacher (1430-1498) and apprentices and some valuable woodcuts by Albrecht Dürer (1471-1528).

On the first floor there are temporary exhibitions - the museum gives great importance to the graphic works of the twentieth century by regional and international artists.

Other sights and highlights

The Museum of Customs in Bruneck is interesting from the standpoint of local folklore. It is an open air museum, with several mills, granaries and local traditional furnishings.

Among the most fascinating destinations of Brunico we also mention the War Cemetery, where the fallen are buried from the battle front in the Dolomites of the two World Wars.

Besides being a great art city, Bruneck is famous with tourists for both its summer and winter sports. The ski area “Plan de Corones” offers excellent opportunities to practice a variety of winter sports such as skiing, sledding or snowboarding, and in summer for cyclists there are plenty of suitable routes, and perhaps a refreshing dive in the water park.

As regards the local cuisine, there are plenty of restaurants offering traditional dishes of great interest to gourmets, with specialties such as goulash with "canederli", and game with mushrooms.

Map of Bruneck and places to visit

Places to visit near Bruneck 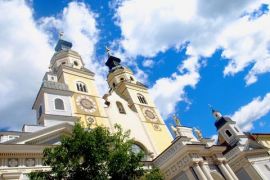 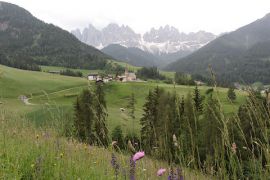 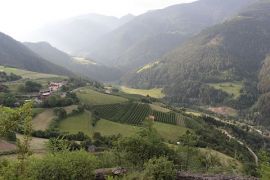 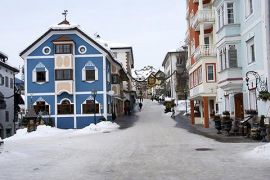 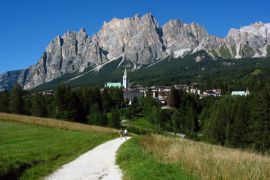 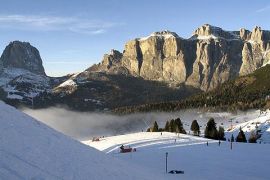