The small village of Artimino, on a small hilltop about 25 kilometres west of Florence, makes an attractive detour from the better known destinations nearby to see the two historic monuments and the etruscan museum in the village

Although very small, really little more than a hamlet, in Artimino you can enjoy seeing a traditional roman style church as well as the imposing 16th century Villa di Artimino and the fortified walls that have protected the town since medieval times.

You can enter the village through Porta Turrita, one of the original gateways through the medieval walls and now a clocktower and belltower before taking a stroll around the village centre. 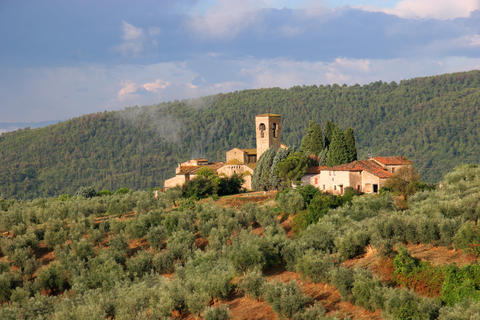 One monument of particular interest (outside the town walls) is the Church of San Leonardo, one of the best preserved village churches in the romanesque style to be found in the region and dating from the 10th - 11th century. The medieval church features a square tower and a semi-circular apse. Inside you can see sculptures in terracotta and wood as well as remains of ancient frescoes and other medieval artefacts and stone carvings.

Just outside the village walls you can see the Villa di Artimino. This villa was designed and built at the end of the 16th century for Grand Duke Ferdinand 1 and is best known for the numerous chimneys that adorn the roof - it is sometimes also called the Villa of a Hundred Chimneys (and also sometimes the Villa Ferdinanda).

Apart from the roof, the villa is rather austere in external appearance despite the grand staircase that leads to the entrance. Inside the are several very impressive 16th century frescoes ceilings, and you also get a nice view to the village across the olive groves from the villa terraces - it is said that the villa was built here deliberately to benefit from this view. 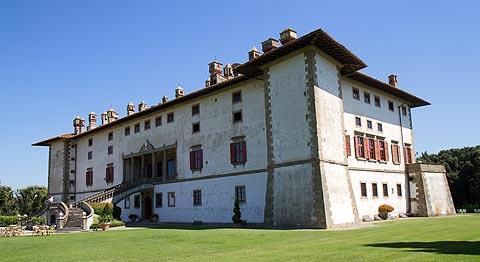 Part of the villa is now also an attractive hotel - see Hotel Paggeria Medicea for details and bookings.

Inside the basement of the villa you can visit the Etruscan Archaeology Museum. The area has been settled since etruscan times - in particular the region between the villa and the current village - and several important artefacts including vases, cups and other utensils have been discovered from that period and can be seen in the museum. The highlight for us was the ornate incense burner.

Close to Artimino at Poggio a Caiano you can visit the Medici Villa, best known as being the first renaissance style Italian villas. As well as being of historic interest this is an important and imposing villa - see Poggio a Caiano for full details.

You can find more local travel ideas in the Prato guide and the Tuscany guide.

Map of Artimino and places to visit

Places to visit near Artimino 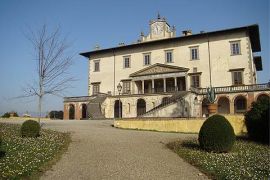 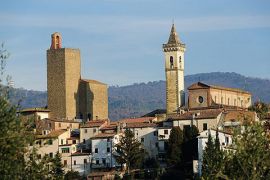 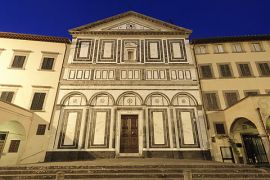 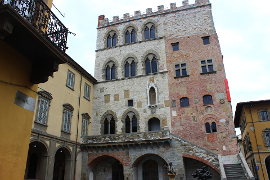 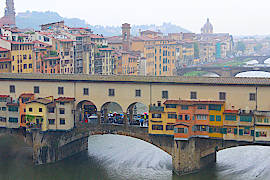 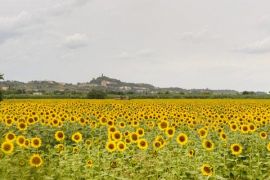