Of ancient Etruscan origin (dating from the 7th century BC), the original settlement here stood on an elevated plain, with very steep slopes and shaped by the two streams that flow around it, the "Folonia" and “Picciolana”.

To the east, where the slope was gentler and allowed an easier climb to the hill and the city the Etruscans built a powerful defensive wall surrounded by a wide moat.

The original name for Sovana was "Svea", later Latinized into "Suana" and then turned into the Italian “Soana” – “Sovana”. 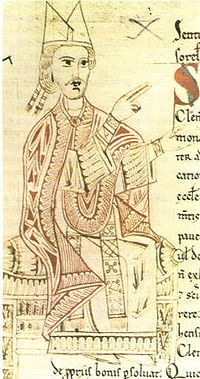 We know the ancient Etruscan place-name because, in the Etruscan tomb “François” in Vulci, we see a cycle of paintings depicting the battle of the Etruscan hero "Rasce" striking and defeating an adversary, who was called "Svea-mach," an ethnic name which refers to the name of the town of "Svea". According to experts this could have been an aristocratic name for an illustrious family.

In the third century BC, Sovana became a Roman "Municipium", but was able to maintain its typically Etruscans customs and traditions, as evidenced by the archaeological excavations.

In the Middle Ages, Sovana had a period of great splendour and of economic and building development, especially between the 11th and 12th centuries, under the rule of the powerful family of the Counts Aldobrandeschi and was also home to Hildebrand of Soana (1028 ca.-1085), who was to become Pope Gregory VII (pictured left).

Pope Gregory was famous for his church reforms, and for the events that tied him to the conflict with Emperor Henry IV, whom he excommunicated and made to wait three days opposite the fortress of the Countess Matilde of Canossa before receiving him and removing his excommunication.

Later, the city was under the Orsini and at the beginning of the 15th century, it was subject to the dominion of Siena. Towards the middle of the 16th century it was ruled by the Medici Family of Florence, but, at this time, Sovana experienced a serious crisis that caused the depopulation and the transfer of the bishopric to Pitigliano.

The crisis continued under the Grand Duchy of Tuscany and into the 19th century.

Today, thanks to archaeological excavations that have uncovered important evidences related to its Etruscan origins, and its preserved medieval Old Town, Sovana is now a major tourist destination.