The name Pienza is relatively recent, but the town stands on an older development, probably of Roman or Etruscan origin, which was called Corsignano.

In the 12th century the town was listed as Cursinianum (the suffix '-anum' refers to a landed property, belonging to a family called Corsinius). Pienza itself, however, is a new city established by Pope Pius II, ie the great humanist Enea Silvio Piccolomini (1405-1464), who was born here. 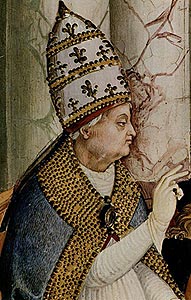 The building activity undertaken by Pius II was radical, in the sense that he prepared a city map which was completely new in comparison to the old Corsignano. The Pope also wanted a redevelopment of existing buildings, partially demolishing and completely renovating many of them.

Pope Pius II called the best architects of his age to build 'his' city, which he wanted to call Pienza in honour of his own papal name. These architects particularly included those from the great school of Leon Battista Alberti (1404-1472) - Pius II entrusted the task to the architect Bernardo Rossellino (1409-1464), who had been a pupil and collaborator of Leon Battista Alberti.

The major building work began in 1459 under the direction of this Bernardo Rossellino, who respected the original plan of the ancient village of Corsignano, but gave way to an impressive array of elegant new developments such as large buildings for the residence of Cardinals who formed the court, that always follows the movements of the Pope, and also many buildings of a more popular character.

Unfortunately the large project of the renewal of Pienza stopped in 1464 when Pope Pius II died. After that Pienza  returned to being a typical settlement with an economy largely based on agriculture.

Between the16th and 17th century the city was in the middle of the battles between the Sienese and Florentines, leading to very serious damage to its walls which were partly destroyed.

Pienza in the 18th century witnessed a period of crisis and economic stagnation. In the following centuries it made several renovations and restorations, but these largely ignored the Old Town, which still retains the “Alberti” character of its architecture.