The city of Orvieto is closely identified with its cathedral, one of the greatest masterpieces of Italian Gothic and built between 1290 and 1330.

The cathedral of Orvieto is predominantly a 'Gothic cathedral', but in fact there are many styles involved. below we introduce both the cathedral itself and some of the many important artworks it contains

The first builder that we know of is the Benedictine Fra’ Bevignate (born in 1250 ca.), who built the three aisles as far as the transept. Under Giovanni Uguccione (14th century), the transept and apse were completed. In 1305, Lorenzo Maitani (1275-1330) strengthened the sides of transept and the two apses with four arches - he also designed and modified the façade and continued the construction of the roof. 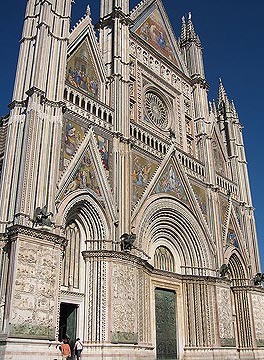 In the central cathedral door, which divided into six panels, the "Seven Acts of Mercy" are represented.

Inside, the artist's work is still visible in the gallery, located on the wings of the eastern buttress which was completed after his death. Along the walls of the aisles there are ten chapels. The floor of the cathedral is made of red marble - it was started in 1347, and then completed between 1383 and 1388.

The baptismal font in Orvieto cathedral was designed and initiated by Luca di Giovanni in 1390 and completed in 1406 by the Sienese Sano di Matteo (1392 ca.-1434). In front of the baptismal font, on the left wall, the "Majesty", a work by Gentile da Fabriano (1375-1427), is particularly noteworthy.

The nave is surmounted by a large window in Gothic style, almost 17 meters high and 5 metres wide, a work begun by Giovanni Bonino of Assisi and finished by Nicola Nuti in 1334. The glass of the window is composed of over 40 panels depicting the story of the Virgin and Jesus,  Saints, Doctors and Evangelists.

The walls are covered with frescoes by painters of the local school, and executed by Ugolino del Prete Ilario and Pietro Puccio between 1370 and 1380. They were restored in 1491 by Giacomo Bologna (15th century) and then by Pinturicchio and Antonio da Viterbo, called the "Pastura" (1450 ca.-1516).

The apse is divided from the transept by a staircase in travertine with a balustrade in dark red marble by Ippolito Scalza, also the creator of the "Pieta", carved from a single block of marble. 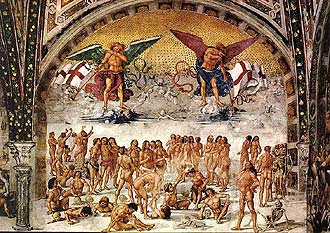 In the cathedral the "Judgement" by Luca Signorelli is a masterpiece of the Renaissance, and located in the “San Brizio” Chapel on the right side of the Cathedral - and an unmissable highlight of your visit.

In the first span we can see the 'End of the World' then on the left wall the 'Preaching of the Antichrist' and, on the right, the “Resurrection of the flesh”. In the second span, “Christ the Judge" is seen above the altar.

In a corner of the wall, which relates the “Facts of the Antichrist”, you can see two figures dressed in black, who observe the scene carefully, and have been identified by art critics as portraits of the famous painters Beato Angelico and Luca Signorelli.

The 'Opera del Duomo' Museum also features an exceptional artistic experience. Start with the "Madonna and Child, Saint Catherine of Alexandria and St. John the Evangelist" fresco. Following restoration, it is considered by critics to date from the early 14th century. At that time many artists worked in Orvieto, whose works are now grouped together as a work of Master of the “Madonna di San Brizio”.

Also worth mentioning is the "St. John the Baptist," part of a fresco depicting St. John covered with a skin of camel, with his right hand in front of his chest and his index finger stretched upwards. The head of John the Baptist is powerfully shaped and long locks of curly hair and beard are described in detailed. Particularly rich is the halo of the saint, with two concentric bands. 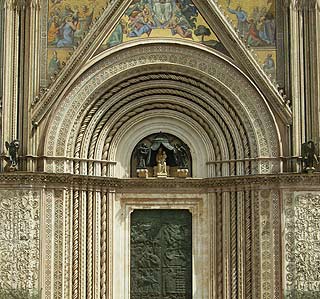 According to critics, the author of the fresco was probably not of ocal origin, perhaps being from Todi. Even the "Madonna of the olive" (XV century, narrating the legend of the Virgin to a baby) seems to have been made by a painter of high quality, perhaps from Siena.

"The Adoration of the Magi" (XIV century), finally, although also fragmentary, shows the skilful hand of an excellent artist. In fact, it is assumed to be by a painter of remarkable technical skills, because the characters are described with great finesse and elegance (art critics in the past thought the work was by Pietro di Puccio, but this is inconclusive).

Another important fresco to see in orvieto cathedral is the work by Andrea di Giovanni (1477-1548), the "Nativity and Adoration of the Magi", which was probably part of a larger cycle devoted to the childhood of Christ, attributed to Andrea di Giovanni, a local painter.