The discovery in 1444 of the so-called "" ["bronze plates"], which were expertly illustrated by Giacomo Devoto, was essential for the understanding of ancient Gubbio, which the Romans called "Iguvium". The "Tabulae" offered important data from a historical, religious and linguistic point of view. 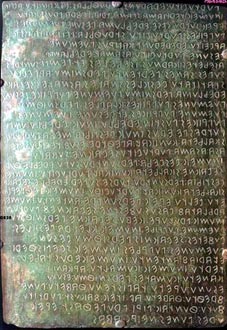 Meanwhile one of the problems that arose was whether, with regard to the ancient Gubbio, it is permissible to speak of a "city", or simply of a "fortress".

Supporters of Gubbio as a "city" base their claims by referring to the "gates" of an ancient urban structure. Other scholars have rightly pointed out that the reference to "gates" is not sufficient to identify Gubbio as a city, because the old "Arx" ("Fortress"), of course, had its gates, which, indeed, are part of a castle.

The linguistic data from the study of the "Tabulae" showed some important things, namely that their language is Indo-European in origin, and that "Osco-Umbrian" is the basic language, next to which are Latin and Greek, modified according to the linguistic needs of Umbria.

The "Tabulae" are important for the study of the ancient gods of Gubbio, an issue which interests scholars because the "Tabulae" make explicit reference to some local cults.

Ancient history and beginnings of Gubbio

According to archaeological finds, settlements in the territory of Gubbio date back to the Paleolithic era.

From the 7th century BC, "Ikuvium" assumed a considerable importance, as evidenced by the "Tabulae", which, in addition to religious services, offered some information about the social and urban layout of the ancient city, provided with walls through which three gates opened, the "Tessenaca", "Trebulana" and “Vehia”.

From the fourth century BC, "Ikuvium" entered within the orbit of Roman rule with the name of “Iguvium”, maintaining friendly relations and alliance with Rome, and receiving the title of “Municipium”.

In the Roman Imperial age, "Iguvium" had a remarkable period of building expansion, as seen in several buildings such as the theatre (one of the greatest of its time, which had an auditorium with a diameter of 70 meters and fit for 6,000 spectators), the “thermae”, and villas for the rich bourgeoisie and nobility of Rome.

After the fall of the Roman Empire Gubbio was subjected, like other Italian cities, to the barbarian invasions and involvement in the terrible and devastating “Gothic War” (sixth century AD), during which it was destroyed.

From the eleventh century, "Eugubium" (this is the name of the city in the Middle Ages) became a municipality, with ample privileges granted to it by Emperor Frederick Barbarossa /1122-1190) and Henry VI (1165-1197).

In fact, during the 11th and 12th century, the townspeople were Ghibellines, supporters of the Emperors policy, although the political situation was, in those days, very confused, with sudden variations in political allegiances and alliances. In 1065 and in 1091 Gubbio formed an alliance with the Guelphs of Perugia, Orvieto and Spoleto against the Ghibellines municipalities of Bevagna, Todi, Amelia and Foligno.

The infighting in the thirteenth century was also tough, between the nobility and bourgeoisie for control of the City; and, in the 14th century (1350), there was an attempt by Giovanni Gabrielli, a member of the nobility, to take over the city - we can still see the “Tower of Gabrielli” in Gubbio, a true Home-Fortress). For many years he resisted all attempts to take away his power, until he had to give in ti Cardinal Albornoz (1310-1367).

The city then became a domain of the Church State until 1358, when it came under the Lordship of Antonio da Montefeltro (1348-1404). Under the Dukes of Montefeltro, the city had a period of prosperity and development especially in the arts, in conjunction with the Government of Duke Federico da Montefeltro (1422-1482).

It was for Duke Federico da Montefeltro that the construction of the Ducal Palace took place (from 1476), attributed to Francesco di Giorgio Martini (1439-1501).

In 1508, with the extinction of the Montefeltro, the Ducky of Urbino, which included Gubbio, went to the family of Della Rovere, who ruled it until 1624, when Duke Francesco Maria II (1549-1631), without direct heirs, gave it to the Church. From that moment, Gubbio remained a domain of the Church State until the Unification of Italy in 1861.

Gubbio:  History of Art in the City

In the field of visual arts, Gubbio is represented by many personalities of great importance, starting with Oderisi da Gubbio (1240-1299). We know that Oderisi da Gubbio worked in several Italian cities, such as Bologna, Rome and Gubbio from 1264 to 1265 [6] but, unfortunately, all his work was lost.

Oderisi da Gubbio is famous for being mentioned in a passage of Dante Alighieri's (1265-1321) "Divine Comedy" as the most skilful miniaturist of Italy (“Oh!, diss'io lui, non se' tu Oderisi/ l'onor d'Agobbio e l'onor di quell'arte/ ch'alluminar chiamata è in Parisi?”  [  "Oh, I cried out, are you not Oderisi, / Honor of Gubbio, glory of that art / Which in Paris they call ‘illuminating’?" [5].

Among the most illustrious painters of Gubbio, first we mention Guido Palmerucci (1280-1345), who worked in various churches of his city and Ottaviano Nelli (1370 ca.-1445), also very active in Gubbio. They are two painters who were influenced by the Sienese school, especially for the accuracy of details in their artworks. Other local 14th century artists were Giovanni di Agnolo Danti, Bartolo Di Cristoforo and Cecco Masuri (or Masuzzi) [7].

At the beginning of the 15th century a local artist of considerable ability was Ottaviano di Martino Nelli, who made his city famous with the "Madonna del Belvedere", now in the Church of Santa Maria Nuova and depicting the "Madonna and Child with Saints". The work has a light, bright, strong visual impact.  Other frescoes by Nelli were discovered in the last century under the plaster of the Church of San Francesco, called the "Judgement".

Etymology and origins of the name Gubbio

Despite the progress of studies, the question of the etymology remains very uncertain. Starting with the oldest hypothesis, we quote Luigi Lanzi, according to whom "Iguvium" had its roots in "Vicu Juvu," which he translates as "pagus" ("village") and "Giovio", with reference to a tribe “Jovia”:

"[...] That 'Vicus' or 'pagus' is called 'Giovio', as near Capua “pagus Jovius” ... Several villages could also be called in a different way , but all refer to the "Giovia Tribe", and therefore with this generic term, they were called “Vici Jovii”; so, the inhabitants were called “Vicijovini”, and, in their own language, "Icuvini", and they called their city "Icuvium" [...]" [2].

Another more recent etymology is proposed by G.B. Pellegrini, for whom the name derives from “P-ikuvium”, with the subsequent loss of the starting “P”, from which “Ikuvium” derives, which is considered the antecedent of the Latin word “Iguvium”. In this case, the name means "the city" or "the woodpecker tribe" [3].

A third hypothesis proposes, instead, a Greek root, "Ikonion" ("image"), but this solution appeared unconvincing from the beginning [4]. However, the question, as we see, is still very much open.