The imposing Basilica of Saint Francis in Assisi consists of two churches; the lower one in Romanesque style dates from around 1230, and the upper church in Gothic style opened in 1253.

The greatest artists of the 13th and 14th century (Cimabue, Giotto, Simone Martini and Pietro Lorenzetti) worked on the decoration of the Basilica, and left on its walls the most complex examples of medieval Italian painting.

With regard to Giotto, the stories of the legend of Saint Francis which occupy the entire lower area of the two walls of the nave and the inner face were painted in the late 13th century, with a broad collaboration of apprentices - in any case, the mark of Giotto’s art is clear, and is based on a strong naturalism and also a remarkable naturalness, which is expressed with well defined volumes, the figures standing out with well-defined contours which enables us to better appreciate the strong expressiveness of the faces. 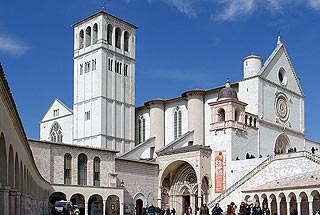 We can see this in the characters and the landscapes throughout the cycle of 28 stories devoted to Saint Francis, and especially in some scenes of strong dramatic "pathos", such as the "Gift of the mantle to poor Knight ", "Waiver of possessions" and also “Sermon to the Birds”.

The presence of works by Cimabue is no less important, and indeed the wider work of Cimabue is represented by his cycle of frescoes in the Upper Church of Saint Francis: "The Four Evangelists" in the vault of the presbytery, "Stories of the Virgin" in the Choir; the "apocalyptic scenes" and “Crucifixion" in the northern arm of transept and, finally, the "Healing of the Lame" in the opposite arm.

The other frescoes in the south of this arm of the transept are a work by his pupils, including the "Crucifixion", which originally some critics thought to be an early work of the Master, but more careful investigation proved to be the imitation by a disciple of the “Crucifixion” by Cimabue, located in the north arm.

Certainly the most dramatic scene is the "Crucifixion" in the north transept, dominated by a sense of cosmic disorder, accentuated by the night atmosphere and dynamism of the curved figure of Christ, who makes a violent motion towards the crowd below.

Also very important are the frescoes by Pietro Lorenzetti in the lower church of San Francesco: six works depicting the “Deposition of the Cross”, the “Crucifixion”, “Deposition in the tomb”, and other “Stories of Passion”, probably made by his pupils. Definitely the high point of Lorenzetti's work is reached in the "Deposition from the Cross", which take a deep colour, reduced to a few tones and a precise design, with clearly marked lines.

The "Stories of the Life of Saint Martin", by Simone Martini, were painted in the lower church from 1322 to 1326. Another noteworthy artistic feature is the Cathedral itself, dedicated to Saint Rufino and with a Romanesque façade from the 12th century and the Basilica of Santa Chiara, built in imitation of the Upper Church of San Francesco.