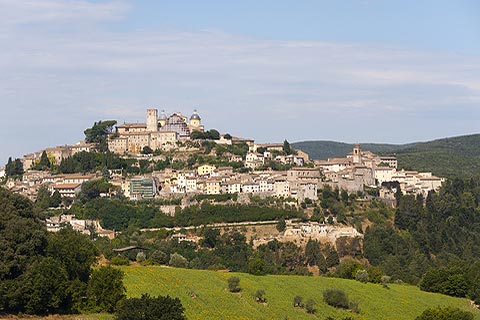 The ancient Umbrian town of Amelia is located in a hilly area about 400 meters above sea level, towards the south of the Umbria region of central italy between the Tiber and the Nera River, on a hill on the right side of the stream called “Fosso Grande". It is one of the most interesting old towns in southern Umbria.

In the town, which is surrounded by massive 'polygonal' walls, many styles are combined from the Middle Ages until the 18th century. The churches and palaces demonstrate the importance that Amelia had in the 16th and 18th centuries from the artistic point of view.

There is much to see in Amelia including many palaces and churches which preserve exceptional works of art.

We begin a visit at the Church of St. Francis, dating from the late 13th century, then rebuilt in the 16th and 20th centuries. The church has a late Romanesque style with Gothic influences. The façade is made of blocks of travertine, and the bell tower was rebuilt in the 20th century. 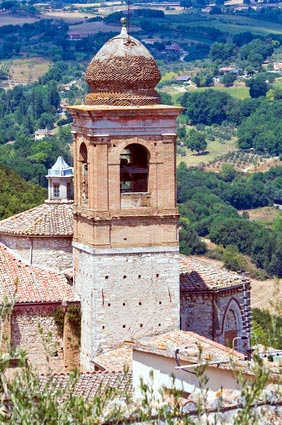 The interior has a Latin cross form, on which stand the tombs of the noble Geraldini Family as the 'Tomb of Elizabeth and Matthew', an important work by Agostino di Duccio*, a sculptor from Florence (1418-1481). Also interesting is the organ in the choir, a work by German craftsmen.

The Cathedral in Amelia was built in the second half of the 9th century. In the 17th century it was severely damaged by fire and reconstructed in the Baroque style. The brick façade is pink, while the interior contains important works of art.

Among these are paintings by Federico Zuccari [1539-1609] ("Ferrantino Altarpiece"), Giovanni Francesco Perini ("Last Supper", dating back to 1538), a native painter of Amelia (16th century), and a painting representing the Madonna and Child by followers of Antoniazzo Romano. Several important altarpieces can also be seen in the cathedral, as can two important organs.

The Church of St. Augustine was consecrated in 1288. It has a Romanesque-Gothic façade and a portal decorated with friezes and allegorical bas-reliefs, while the lunette holds a fresco by the Sienese school and dating from the 14th century.

The interior has a single nave and numerous paintings among which an important painting by Pomarancio [1570-1630], an altarpiece of the "Immaculate Virgin with Saints", by Francesco Appiani and some frescoes depicting the martyrdom of St Pancras, St Augustine, the Nativity and the Holy Family with St Anne.

Above the door is a precious organ of 1841n and in the sacristy and below the apse are traces of 14th century frescoes.

The Church and Monastery of St. Magnus has an organ of great value and, among the painters, we mention a small painting attributed to Marcantonio Grecchi.

Also worthy of a visit in Amelia is the Museum, which houses precious items dating back to the ancient Ameria and also remarkable paintings. Among the archaeological monuments in the museum see in particular the votive figurines thought to date from the 4th century BC. The shield has a relief decoration depicting the face of the Gorgon.

Among the other pieces of great value in the museum are a capital found near the statue of Germanicus (15 BC-19 AD), with the image of a trophy and a Greek marble depicting a scene of dancing with satyrs and nymphs, with a decoration of garlands and cattle skulls (ox skulls), alluding to the sacrifices of the victims.

The Geraldini Palace is in the upper part of the city, just below the cathedral which dominates the old town. The Geraldini Palace was built on the ruins of buildings of Roman origin, partly visible on the east side, using the structures and environments as a base.

The interior of the building has five rooms with frescoes of considerable interest (late 16th century) attributed to Taddeo and Federico Zuccari and their school. The name of the Geraldini is linked to an important artist, a native of Amelia, called Piermatteo d’Amelia*.

A member of this family, Alessandro Geraldini [1455-1524] was in the service of the court of Spain, and was confessor to Queen Isabella (1451-1504). He also helped Christopher Columbus to get the three ships for the trip that led him to the discovery of America. He was later Bishop of Santo Domingo, where he died in 1524. 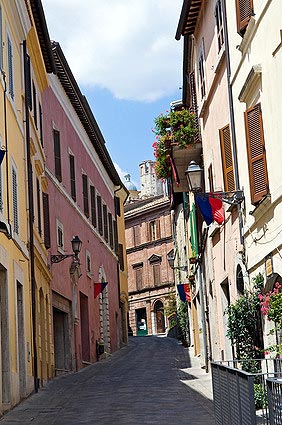 In the Venturelli Palace there are remarkable mosaics from the second century AD, made with black and white tiles arranged in geometric designs and stylized with floral motifs. Of particular beauty is the decoration with the telamons (male figures with a support of masonry structures), allegorical scenes and views of Amelia.

Petrignani Palace was built in Amelia in the 16th century in Renaissance style. The building, still unfinished, was ordered by Fantino Petrignani, a famous figure in the Papal Curia under the protection of Pope Gregory XIII (1502-1585). The imposing brick façade is divided into four levels divided by horizontal stone bars.

The main floor has seven rooms and it is home to a vast series of paintings dating from the last quarter of the 16th century. There are scenes of historical, allegorical and biblical subjects. Of particular note are the frescoes in the Hall of the Zodiac.

Also important is the Farrattini Palace, which was built between 1520 and 1525 at the behest of Bartolomeo Farrattini and designed by Antonio da Sangallo the Younger. It has a geometric façade and the portal is bordered by a stone cladding.

The main floor consists of six rooms, including one known as the Emperors, and that of the Cardinal, in which the walls are covered with an old red damask fabric with a rare 17th century chandelier.

Boccarini Palace was the home of an illustrious family who settled in Amelia towards the end of the 13th century. Of particular interest is the so-called “Salone Amerino”, with remarkable frescoes attributed to Livio Agresti, the last sixteenth century Mannerist painter, and depicting scenes from history and mythology.

The Cansacchi Palace was built on a base of Roman walls, which are still visible in some places. It has a square tower and rectangular windows with a band in travertine. The courtyard has a collection of fragments of tombstones.

There are several noteworthy places in the area around Amelia. About 7 kilometers away there is the famous Roman Villa of Poggio Gramignano. Recently discovered it is a country villa which introduces visitors to the region around Amelia and its products, known since ancient times...Pliny and Columella spoke of the abundance of fruit in the territory of Amelia, especially pears and apples:

"The pears and apples from Amelia were very famous, because they first ripened on the tree in winter, and the latter were particularly sought after for their taste, and good for health"

Among the traditional dishes local to Amelia we mention the vegetable soups, the noodles, polenta and the so-called “strozzapreti” [flour or potato dumplings], mixed by hand with water and flour.

Map of Amelia and places to visit

Places to visit near Amelia 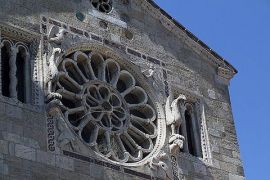 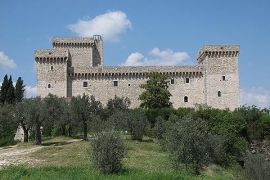 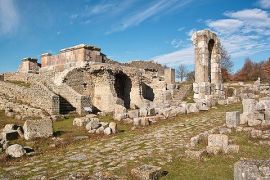 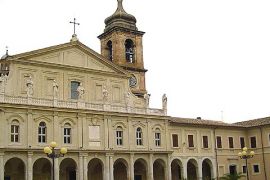 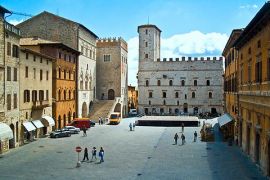 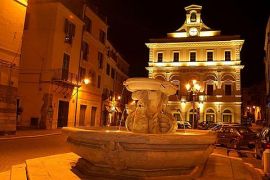