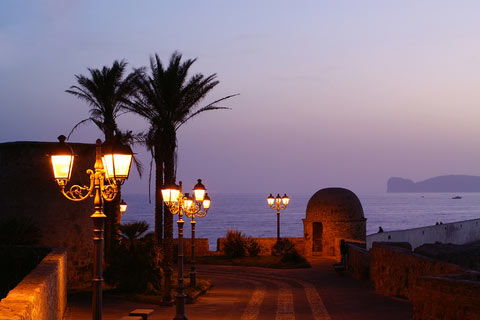 A popular coastal and beach resort on Sardini's north coast, Alghero also has a lively harbour, a well preserved old town has a good number of interesting historical monuments and plenty of cafes and shops to distract you. It is also still an active fishing town.

The history of the town, which was settled by people from Spain who 'evicted' most of the local population in the 14th century, means there is a significant Catalan influence to the architecture. See also history of Alghero.

Although we focus on the historical monuments in Alghero in this guide, much of the pleasure of a visit comes from simply strolling around the harbour area and the narrow cobbled streets of the historic center, most of which is on a promontory into the Mediterranean Sea. 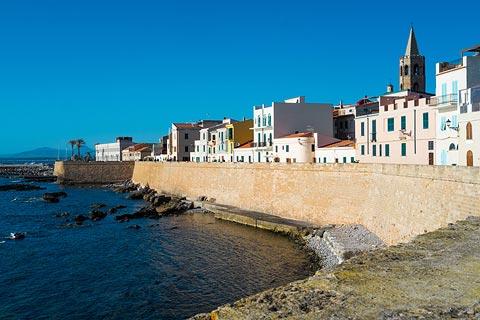 Your visit to the town could start from Dante's and Christopher Colombus waterfront, along which there are a series of fortified bastions that lead to the port. In fact most of the port area is surrounded by these defensive walls.

Around the port in Alghero there is also a good choice of bars and cafes.

Not far from the staircase that leads to the ancient "Porta a Mare" you can see the imposing structure of the Fort La Magdalena, a major fort dating from the period when the Spanish controlled Alghero.

In the heart of the town is Alghero Cathedral, dedicated to Saint Mary. Built in the 14th century, it assumed its current appearance around the middle of 16th century. The architectural style of the cathedral is Catalan-inspired late Gothic and the structure is surmounted by an octagonal Bell Tower from the same period.

You will notice several other towers around the edges of the historic town, typically dating from the 16th century, such as the Torre dell'Espero Reial, the Torre San Giacomo, the Torre di Porta Terre, the Torre della Maddalena and Torre Sulis. You can see all these towers by walking around the coastal side of the promontory. 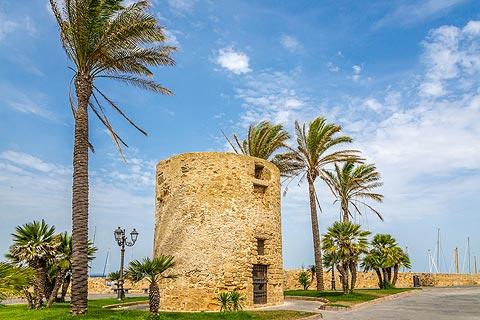 The Church of San Francesco is certainly the most significant Catalan monument in all of Sardinia. The church was originally built at the end of the 14th century but then re-built partly due to a collapse in the early 17th century, so shows different building styles - both romanesque and gothic style elements are present. The cloisters and belltower are among the notable features.

One feature unique to Alghero is the Aragonian Palaces, such as the “Casa de Ferrera”, which in 1541 gave hospitality to Emperor Charles V (1500-1558),  the renaissance style “Casa Doria” and the “Palazzo Peretti” in the Catalan-Gothic style.

The Town Hall was built later, around the first half of the 19th century, and is characterized by the size and elegance of its neoclassical forms. Another example of the same style can be seen at the “Palazzo Lavagna”, built in 1873, and the “Villa Sant'Elia”, built outside the town between the 19th and 20th century and incorporating the model of the medieval castle.

The Civic Theatre, built in the second half of the 19th century, is also in neoclassical style.

Of course, after exploring the town you will probably want to spend some time relaxing on one of the many beaches immediately north of the town such as the extensive Spiaggia del Lido. 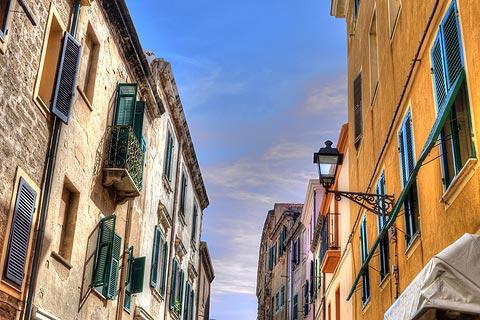 Alghero also has important archaeological and cultural sites for visitors interested in ancient local history. These include:

Nature lovers on a visit to Alghero will want to take a trip to the marine protected Capo Caccia - Isola Piana, the waters of which overlook the spectacular rocky spur of Capo Caccia, a paradise of underwater caves.

Boat trips to the caves can be organised in Alghero harbour. Among the most visited of the caves are the Caves of Neptune, impressive by the presence of stalactites and stalagmites and reached either by sea or via the many steps of the “Escala del Cabirol”, and the Grotta Verde.

The local cuisine is also among the traditions that have made Alghero an important tourism destination. One particular speciality is the lobster cooked in "Catalan style" according to an ancient recipe, while other tempting local dishes include the "suckling pig" and lamb - always accompanied of course by a good wine produced by one of the local wineries.

The town of Alghero is situated on the Mediterranean coast of north-west Sardinia.

Map of Alghero and places to visit

Places to visit near Alghero 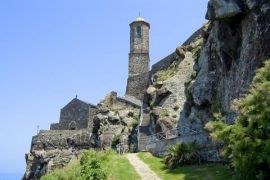