Albenga is a town near the coast of Liguria in north-west Italy. The highlights for visitors are the interesting medieval centre with the baptistry and cathedral, and the museum that contains the remains of a 1st century ship.

Interesting to note, in Roman times Albenga was a busy port town called Albium Ingaunum. The coast receded over the centuries and the modern town is no longer on the coast.

Albenga is unique in Liguria in that it has preserved the town's ancient Roman structure, with the two main streets, the “cardo” and “decumanus” intersecting at the center, and a series of medieval towers perfectly integrated in the layout - hence Albenga is also known as the 'city of a hundred towers'.

Your visit to Albenga can start from the “Via Aurelia”, one of the principal roads in the centre of the town and where you can see some remains dating from Roman times. 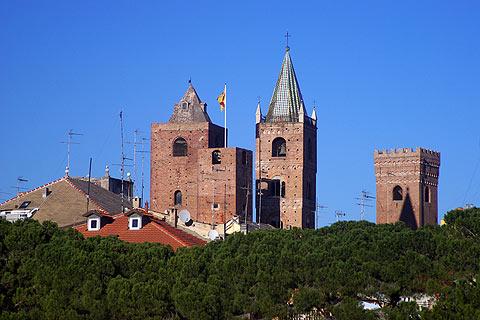 The Cathedral in Albenga holds some interesting works of art, and is a Romanesque style building dating from the 11th-14th centuries, although it has been altered several times and the interior is now in the much later Baroque style.

The cathedral bell tower is considered to be among the finest monuments of late gothic style architecture in Liguria.

Archaeological excavations in the cathedral have uncovered a "Last Judgement" fresco by brothers Matteo and Tommaso Biasacci (or “Biazaci”) da Brusca, who were active in the 15th century.

A few meters away from the cathedral is the Baptistry, virtually unchanged from the 5th century and the most interesting monument in Albenga. Unusually the design has a 10-sided exterior and an 8-sided interior. In the octagonal interior you can see an ancient baptismal font and a 6th century mosaic which is rich in Christian symbols.

The original vault in the baptistry has been replaced with a wooden construction. (The original was demolished during restorations, but the materials from which it was built revealed that it dated from the fifth century AD.)

In the small central apse there is a mosaic from the 5th-6th century with the so-called “Monogram of Christ” on the vault, surrounded by 12 doves and a background of the starry sky. 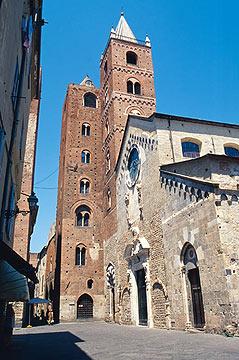 Close to the town centre you can visit the Ingauno Museum which has important remains from the ancient Roman and Byzantine town that stood here including many inscriptions, urns and other stone fragments. It is situated in the 'Palazzo Vecchio del Comune', a 14th century palace with a tower and mullioned windows.

The Piazzetta dei Leoni, immediately behind the apse of the cathedral, is dominated by the Costa Palace and the tower.

The name of the square comes from the three stone lions that the Costa family brought here from Rome in 1608.

Near the centre you can also see Piazza Girolamo Rossi, a square surrounded by medieval buildings and among which there is an intact 14th century house, and the important road called Via Bernardo Ricci, which has largely retained its medieval appearance. 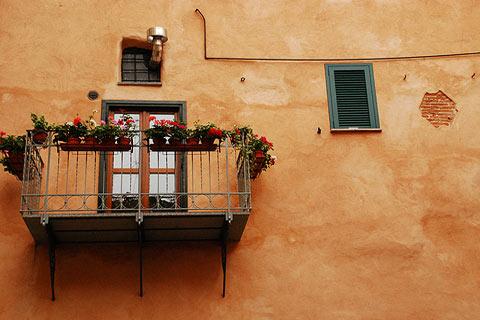 In this part of Albenga you can also visit the decorated halls of the Palazzo Peloso Cepolla, now home to the Roman Ship Museum (Museo Navale Romano) where there are the remains of some amphorae of a Roman ship and other maritime artefacts

The former Bishop's Palace now holds the Diocesan Museum where you can see paintings, illuminated manuscripts and tapestries from the 16th century.

The museum visit passes through seven rooms which hold artifacts found during excavations in the Cathedral as well as some 16th century tapestries, paintings of the Ligurian-Provencal school from the 14th and 16th centuries and large pieces of silverware belonging to the treasury of the Cathedral.

Outside Albenga town walls you can also find some interesting archaeological remains: a tomb tower, known as the "Pilone"; a funerary monument dating from the second century BC; and the ruins of an amphitheater.

Behind the hill, in the 4th century AD, Albenga's first Christian church was built and dedicated to San Calogero - this was later enclosed in the walls of a Benedictine monastery, now in ruins.

A short distance north of Albenga you can visit the impressive caves of the Grotte de Toirano, and the pretty medieval town of Toirano itself. There are three separate caves in the system, the Grotta della Basura, the Grotta di Santa Lucia and the Grotta del Colombo each with their own highlights. As well as beautiful rock formations you will also see traces left by the people that lived in the caves in prehistoric times such as footprints and bear bones and teeth.

The region around Albenga is also very pleasant to explore with picturesque villages and a landscape of castles and fortified villages of medieval origin. A visit to these is also an excellent opportunity to taste typical local dishes such as “ravioli with faraballà”, pasta filled with vegetables and wheat, and the “Zemin”, a vegetable soup.

Since ancient times the surrounding plain has been planted with gardens and orchards near the villages, while the foothills contain pastures, crops and vineyards. Even today, the plain is rich in vegetable and fruit crops. Among these, artichokes and asparagus are the most popular products, but also courgettes, tomatoes, carrots and leeks, as well as peaches and apricots, basil and other herbs.

On the surrounding hills wines such as the “Vermentino” and “Rossese” are produced, while a typical dish is the 'Imbrogliata' artichoke.

The town of Albenga is in the centre of the coastal region of western Liguria in north-west Italy, north-east of Cervo and Sanremo and on the coast called the Riviera di Ponente. It is about 80 kilometres from the Italian border with France.

Map of Albenga and places to visit

Places to visit near Albenga 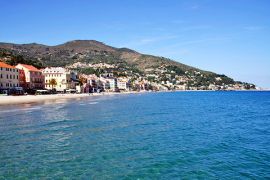 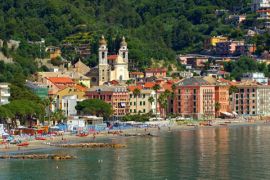 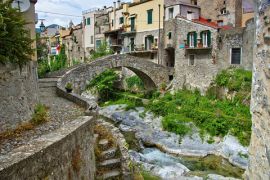 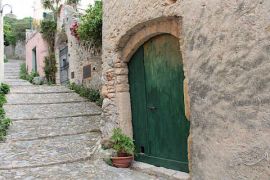 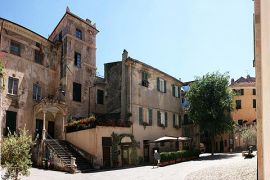