The ancient ruins of Akrai are found at Palazzolo Acreide in south-east Sicily, inland to the west of Syracuse.

In Roman times Akrai belonged to the so-called  "stipendiariae civitates" [=tribute-paying communities], i.e. it was forced to pay taxes to Rome, which could mean that it was always opposed to the Romans, taking the side of Syracuse.

However, Akrai continued to be inhabited even after the fall of the Roman Empire, becoming one of the most important seats of Christianity. Its end came in the ninth century AD, when the city was destroyed by the Arabs.

Explore the Archaeological Park of Akrai 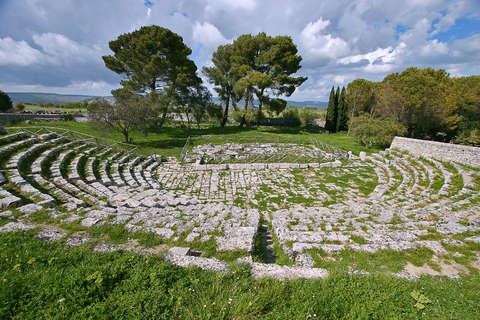 The Greek Theatre within the archaeological park of Ancient Akrai is certainly the most prestigious monument of the ancient "Polis", whose construction began in mid-second century BC. The Theatre consists of eight steps, with twelve rows of stone seats, and it is oriented toward the north.

The orchestra section is semi-circular, and from the top of the “cavea” there is a tunnel that leads to the "Bouleuterion" where the popular assembly met. In the upper part of the Theatre there are the remains of the Temple of Aphrodite, dedicated to the "goddess of Akrai" although today there are only a few remains of the Temple*, destroyed by the earthquake of 1693.

*Bernabo Brea wrote about the Temple: [...] From an ancient inscription found during excavations on the ‘Acremonte’ we know that there were three temples in the ancient Akrai: the ‘Aphrodision’, ‘Artemision’ and ‘Koreion’; these three temples were dedicated to female deities, Aphrodite, Artemis, and Kore-Persephone (…)

Of these three temples it is evident that the ‘Aphrodision’ was the most important. Aphrodite was the chief goddess of the town (...) Of the Temple unfortunately very little remains; only the cuts made in the rock to set the foundations of its structures and a small number of blocks still in situ (…) Perhaps the Temple was already in ruins at the end of the ancient world […]”

South-east of the Theatre in Akrai are the so-called quarries of the “Intagliata” as shown by the presence of some Greek, Roman and Christian graves. You can see various niches with many votive "pinakes", or small votive paintings on the tombs dating back to different ages.

There is also a bas-relief from the first half of the first century BC, depicting a scene of a sacrificial feast of heroes with a central Roman warrior making a sacrifice.

A  paved street in lava stone crosses the town from east to west connecting the Selinunte Gate with the Syracuse Gate. At the foot of the hill there are some important quarries called the “Ferali” Temples. Here the cult of the dead and the cult of heroes were practiced, with the typical Greek inscription "Eros agathos" (Noble heroes).

The so-called "Santoni" of Akrai are reliefs depicting the goddess Cybele (the "Great Mother") and other figures. They represent Cybele wearing a long tunic with a “timphanum” (a shaman tambourine drum), and next to the goddess are the figures of Hermes, the Dioscuri and a pair of maned lions as symbols of royalty of the goddess.

Giarratana suffered an almost total destruction with the earthquake of 1693, after which it was rebuilt a few kilometres downstream, and with some fine buildings of Baroque style. In fact, almost all the villages destroyed by the earthquake that struck Sicily in 1693 were rebuilt according to the Baroque architecture.

We know that Rosario Gagliardi (1698-1762), a famous architect collaborated on the reconstruction of some local churches in Giarratana and on other towns of the Valley of Noto including Ragusa, Modica, Scicli et Palazzolo-Acreide.

Today we can still see the ruins of the Castle of the Princes Settimo, as well as the remains of a Roman villa with mosaic floors. Giarratana is strongly linked to its ancient traditions, and every year (in August) there is the so-called "Onion Festival," where you can taste typical dishes prepared with the "giant onion" of Giarratana

Kasmenai was a fortified town essentially military in character. It was situated on the top of the "Monte Casale", in a strategic position to protect the heart of the Iblei Mounts and the wide coastal strip of Syracuse. A lot of military items, such as swords, spears, and javelins were found during archaeological excavations in the temple city.

Kasmenai had colossal walls, about 3 feet deep, which even today are preserved for almost the entire perimeter of the city. The structural layout of the town was designed from a military point of view with narrow passages between one district and another making it difficult for an enemy to move quickly around the town.

According to studies by D. Erdas Casmene was built according to suggestions provided by Aristotle (384-322 BC) and Plato (428-348 BC) regarding the layout of fortified cities. According to Aristotle and Plato, an urban settlement designed for defensive purposes must be structured by placing homes so that they huddled together to form a compact wall, which makes it more difficult for an enemy to infiltrate the city.

See also Akrai history and etymology (and references cited above).

Map of Akrai and places to visit

Places to visit near Akrai 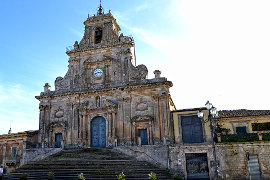 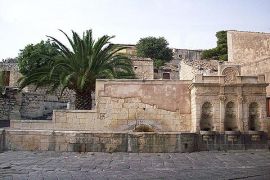 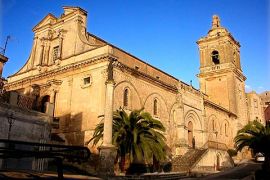 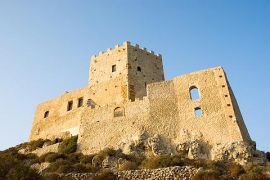 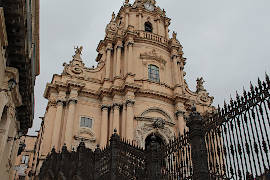